Weekends are for weddings!  If you’re like me, with 9 weddings each year, the weekends are, quite literally, for weddings (attending them, that is).  Also if you’re like me, the weekend is a time to think about planning your own wedding.  Lots of people carve out a certain time each week for  to wedding planning (Wedding Wednesday seems to be very popular).  It ensures the wedding doesn’t take over their whole lives; however, I find that confining wedding planning to a specific time is too pressure-filled and bicker-prone.   I plan my wedding when inspiration strikes.  Weekends, in particular, offer the time to let my mind roam and plan my own wedding in a stress-free environment.  In this series, I’ll take you through some of my major planning steps – hopefully this will help you plan your own wedding!

As Shelby would say in one of my all-time favorite movies (Steel Magnolias), “My reception?  MYYYY reception!”  Everything was beautiful.  Yes, it was a country club wedding, but the idea was for it to not be too stuffy.  Most importantly, we wanted it to be US.

Upon entering the Golf Club, guests all saw our cake on a table in the middle of the foyer.  A garland draped the doorway of the ballroom (which for the moment, was closed).  They were directed around the corner, down a covered walkway, to the Mixed Grill area of the club for the cocktail hour.  Once it was time for the actual reception to begin, the ballroom doors were opened and they were ushered that way.

As I mentioned in my post about the cocktail hour, the reception began with us in a side room, along with our wedding party.  For the first 10 minutes of the reception, as guests made their way into the ballroom, we shared a toast with our friends and got ready to be introduced.

Bridal party introductions are much bigger in the Northeast than in the South, but I think they’re fun as long as you have a group that’s willing to have fun with it.  A groomsman who leapfrogs the bridesmaid he’s escorting?  Great.  Simply walking out, arm in arm?  Meh; skip it.  We have fun friends so we did it.  Everyone was gathered around the dance floor as we all made our grand entrances and had our first dances.  In the South, most speeches go down at the rehearsal dinner, but my father did say a few words as the event’s host.  Then it was time to party! 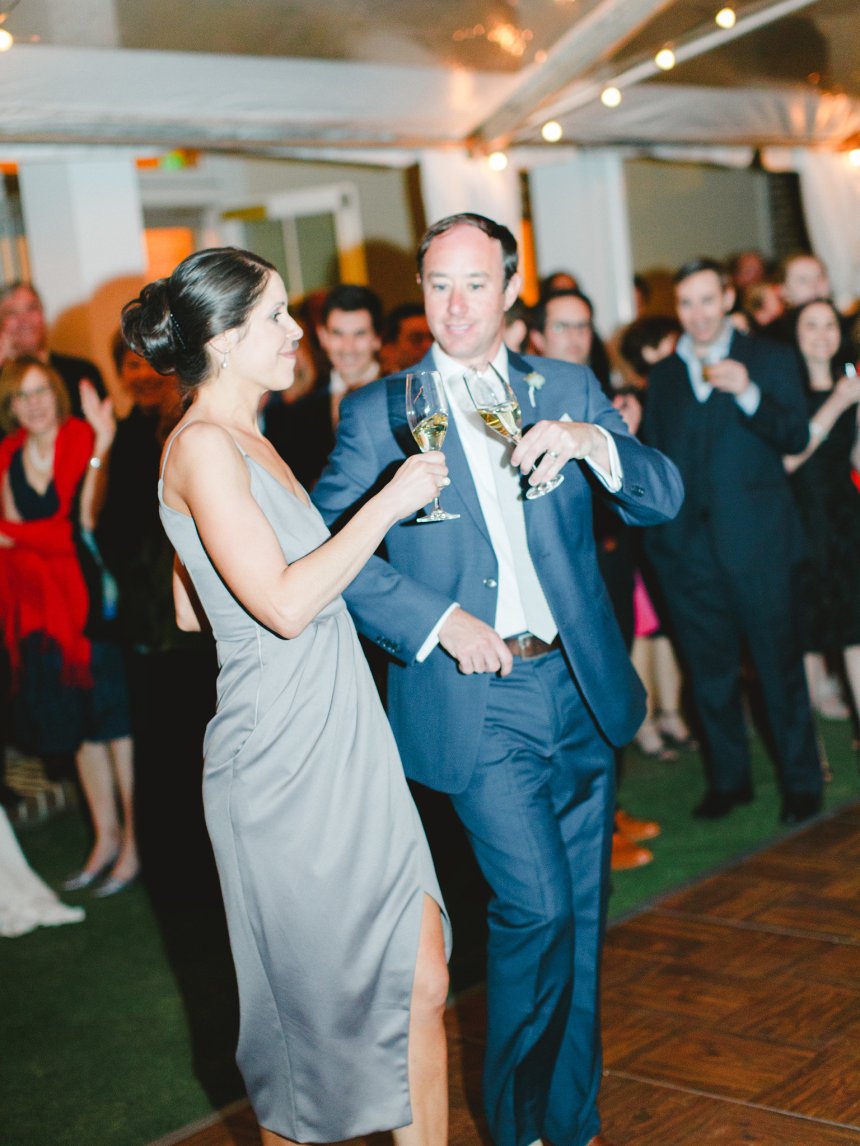 Our reception was set up to be indoor/outdoor.  I loved the idea of dancing around in the fresh spring air.  Our venue has a large courtyard so we set up the band and dance floor out there.  We set the mood by stringing café lights across the night sky and placing tea lights in the crevices of the lattice brick wall that surrounded the space.  Don’t worry, we had a rain plan.  We rented a clear top tent and there was the whole ballroom for us to use, which we planned to use in some capacity no matter what.

We brought in some farm tables so the ballroom would have a mix of table sizes and feel less formal.  We also switched out the chairs for mahogany chivari chairs so the space wouldn’t have such a heavy feel.  The food was all set up in the ballroom so people could come inside for a quiet(er) moment.  Around the dance floor, we set up a couple more fun and interactive elements, like a seating area with club chairs and a photo booth.

It is more customary in the South to have heavy stations rather than a seated dinner.  It’s not a buffet – the stations are spread out and most require a chef to prep and serve in real time.  Of the three options (stations, seated dinner, and buffet), it’s probably the most expensive; however, food is my favorite thing ever so I was more than happy to cut costs elsewhere to have this type of menu.  Some girls prefer to spend a lot on the dress or flowers; I would much rather skimp in those areas and go nuts with the food.  This is a total personal preference thing.  I also love that this style of dinner is more conducive to a party atmosphere.  You don’t have to stop for an hour and a half to eat a sit down meal.  I would much rather grab some food from a station, perch at a table to eat, go dance, grab food from another station, go back and dance some more.

When food is served this way, it’s done as a combination of Action Stations (which are chef-manned) and Heavy Hors d’Oeuvres (which are non-manned displays).  We wanted to make sure the food was balanced, taking number of meat/seafood/vegetarian/cheesy/carb-heavy items into account.  Our menu consisted of the following:

The decor was primarily greenery, like eucalyptus.  I much prefer that to flowers – it’s so lush and romantic.  We wrapped the chandeliers in the greenery and had garlands going down the center of some of the tables.  Of course, we had some flowers as well, like dahlias and ranunculus, particularly in the centerpieces, which were a mix of highs and lows and featured natural elements like moss..  There were also vintage books tucked around the space as a nod to my love of reading.  Our florist described the look as “romantic with a touch of whimsy.”  That just sounds lovely, don’t you think?

And the flowers!  I’m still in love with the florals from our wedding.  There was a bit more pink/flowers than I had wanted, but I have to hand it to our amazing florist – it came out positively beautiful.  It looked like an enchanted forest with greenery dripping from chandeliers and handmade trees growing up from the tables.  There were even quail eggs nestled in there!

We wanted this party to feel like a PARTY!  It’s one of the main reasons I wanted to do the Southern style action station meal – I didn’t want the dancing to stop!  People were going nuts and it’s all I could have hoped for.  I even had a lil costume change halfway through the night.  Once I put on a party dress, it really felt like a party! 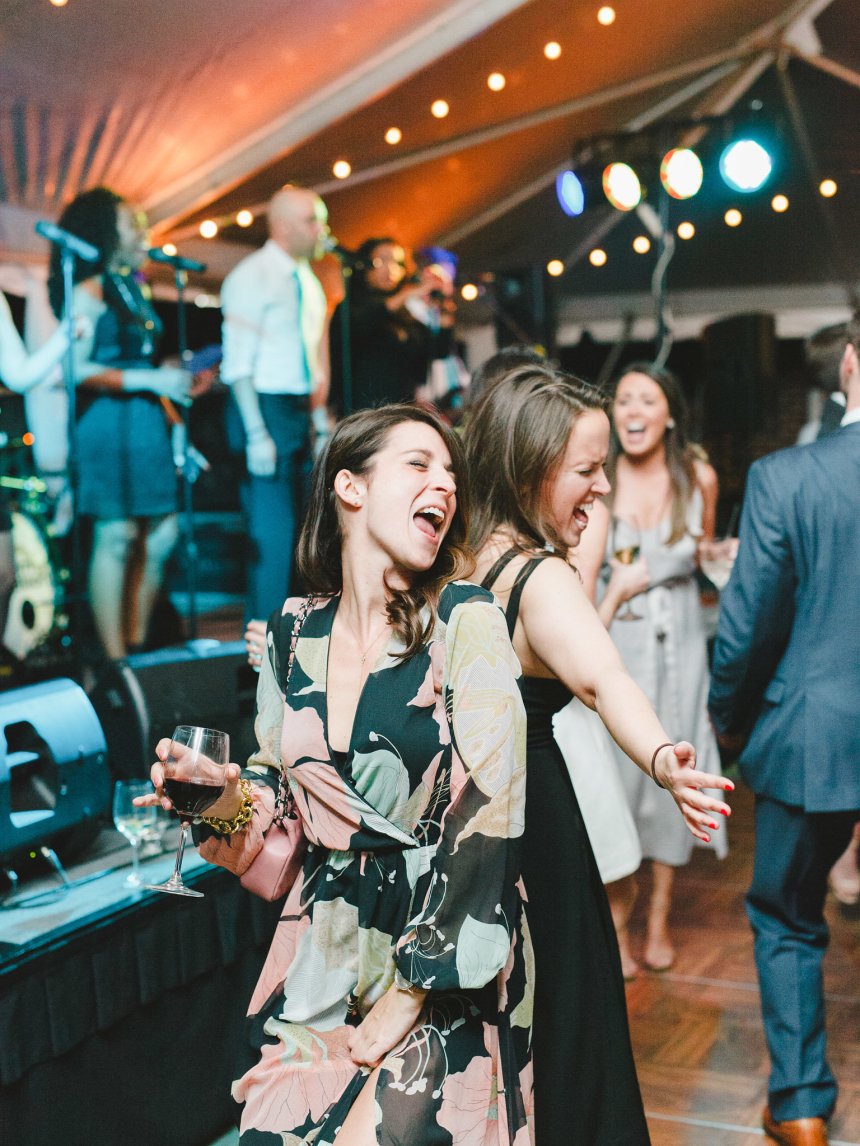