On Saturday Matt, Karina, and I took a lil trip to Philly. Why, you ask? Because I was craving a cheesesteak. No, really, why are you going to Philly, you ask again, rolling your eyes. Because I wanted a cheesesteak. That really is the only reason. When I learned that Philadelphia is a little more than an hour and a half away, I figured I had no excuse to not have the sandwich that sets the bar.

Pat’s, Gino’s, Tony Luke’s, and Jim’s are the famous spots and it seems everyone has aligned themselves with one. Matt’s favorite is Jim’s so we headed straight there. The line is at least 30 minutes long at any time of day and you will smell cheesesteaks for every moment of the wait. Tantalizing.

It was the real deal. The bread was soft but held up against all the fillings without getting soggy. It was also clear the meat was top round – that’s a difference you can taste. My only regret was not getting double whiz because I want to taste that in every bite and there wasn’t quite enough on mine.

I live right by Carl’s, which by most accounts is the best cheesesteak in New York. Many people say it’s just as good as anything you could get in Philly, but I had to make the trip to the city of brotherly live to make such a claim. Now I’ll say with confidence that Carl’s makes a legit cheesesteak (just as good if not better?!  Gasp!), but there’s something special about eating a Philly cheesesteak in Philly.

Jim’s lived up to my expectations and I’m glad I got to pit it against my own Carl’s. But now there’s a new challenge to be held: Jim’s vs. the other Philly cheesesteak masters. I’m always available for a taste test. 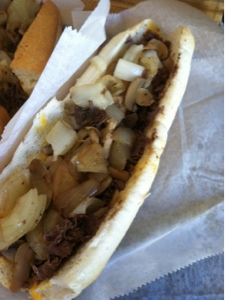