When I noticed Mighty Quinn’s on a cab ride down to the East Village, I immediately recognized it as the place that had the long lines at Smorgasburg the previous weekend.  Then the brain really started working as I remembered a write up in NY Mag and again as I recalled a two-star review in the New York Times.  In his review, critic Pete Wells notes “The pulled pork is the only one in town that doesn’t make you embarrassed for New York. It is staggeringly good.”  I agree.  Though NYC BBQ is what I would define as “fine,” this is the first time I had pulled pork that tasted like I picked it up from one of my favorite spots back home in Savannah.

And the brisket – oh! the brisket!  That’s usually Texas territory.  In my part of the Southeast, we are entirely pulled pork-centric so brisket’s not usually my thing.  But this brisket is different.  Better.  Such a nice crust – arf arf – that’s some good bark they’ve cultivated on the outside of the meat that’s still so tender.  The sausage was also good – just spicy enough to be cooled down by the complimentary pickled cucumbers (barely kissed with the brine) and – but not a standout like the other two dishes.
The taste isn’t the only thing that reminded me of home.  The price point was pretty small town, too.  A half pound of pulled pork will cost you only $7.75 and can come with or without a bun – you wouldn’t pay any less for a sandwich of the same size in the South.  Only the side dishes are New York-y.  I’ve never seen grilled ratatouille or edamame and pea salad at any BBQ place back home and don’t really care to see it here, but I suppose they need to put their Yankee stamp somewhere.  For me, I’d rather pick up mac and cheese from nearby S’mac as my side dish.  A very small inconvenience that doesn’t bother me when the BBQ is this good. 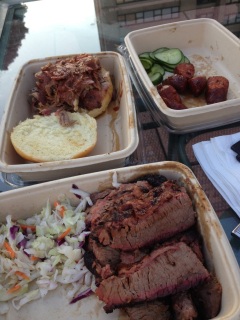