Our third day in Cuba is when I feel like we really hit our stride.  We began to understand what each neighborhood was like and the areas we liked best.

FYI: Don’t forget to check out Part 1 and Part 2 of our trip.

We woke up eager for another one of those amazing breakfasts.  We got all the same stuff but swapped out mango for guava juice.  From there, we took a cab to Centro Habana to walk through Callejon de Hamel, which is about two or three blocks of murals and sculptures with a shrine to the Santaria religion.  There’s also a bar/cafe with a signature drink called the bilongo that I will definitely be recreating at home. 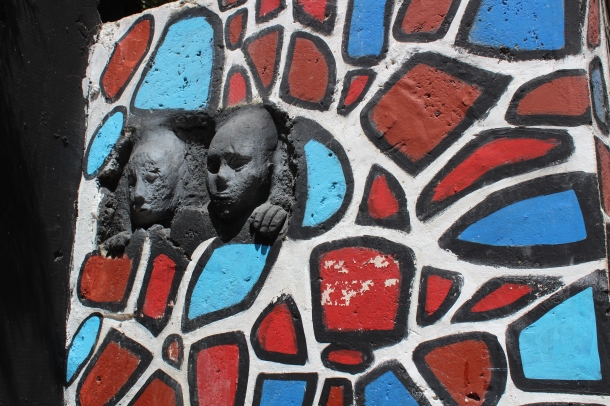 We then went to the Vedado neighborhood to check out a bookstore I had read about called Cuba Libro.  It was on a list of the 50 best bookstores in the world or something like that.  It was more of a cafe, and I got to try a delightful coffee drink called a cafe bombon, which is espresso and sweetened condensed milk.  I was surprised to see the books were all English language.  It was a cute experience and put us in the area of the city we wanted to be in for the afternoon.

We heard the Riviera hotel was a nice throwback to 50s/60s mafia times so we walked around the lobby for a minute.  Not a must see but fine since we were already there and it put us right down the road from Atelier, a restaurant I wanted to check out for a late lunch.  Housed in a white stucco mansion, this restaurant was lovely, right down to the antique typewriters as decoration and handwritten menus.  We had a wonderful meal of tomato carpaccio with parmesan, shrimp with lentils, and salad with octopus and smoked salmon.

After the Vedado neighborhood, we went back to the Airbnb to grab our stuff.  Everything had been so cheap that we literally had more money than we knew what to do with so we checked into a hotel for the second two nights.  We stayed at the Habana Libre because we got a good price and they had a pool (it was the pool that sold me into making the move from our Airbnb).  Let me state that we did not move because we were unhappy with our Airbnb.  In fact I highly recommend visitors spend at least some time in an Airbnb/hostel for the breakfast experience alone.  It was just nice to check out a different part of town and have a pool for that “honeymoon” experience…and because we had money to burn.  Once settled into the hotel, we showered up and got ready to head back to Habana Vieja for drinks and dinner.

We got dropped off by the Cathedral and immediately noticed this part of Habana Vieja seemed nicer than where we had been previously.  It felt almost European with the cobblestone streets and squares.  It’s amazing what difference a few blocks can make.  First stop was Hotel Ambos Mundos, where Hemingway lived for 7 years.  It’s a gorgeous pink building with an old school cage elevator that took us up to the rooftop bar where we had a spectacular view and front row seats for the nightly 9 PM cannon firing from the old Spanish fort.

After drinks, we went to El Chanchullero for dinner because it had come recommended by several people.  I will now be one of those people recommending it to you because it was our best meal of the trip.  Amazing chicken fricase, delicious white sauce on the beef, and fresh salad.  All that plus a few drinks came to 19 CUCs.   This is definitely a cool place to be, as evidenced by the clientele and the line we had to wait in.  The restaurant is three floors but very narrow and almost rickety.  I felt like I was hanging out in the East Village.  The whole place operates off four burners and one tiny refrigerator so it’s pretty amazing they crank out the food like they do.  Along our walk we also realized Habana Vieja really comes alive on the weekend and feels less…seedy.  I’m glad we got to experience the full range. 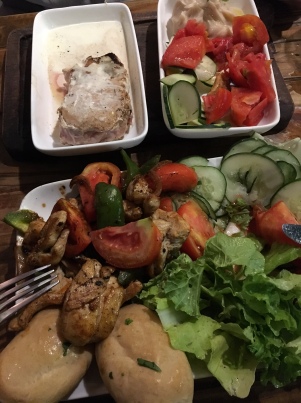 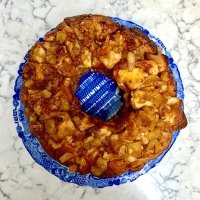