Start typing and press
Enter to search
Follow
Skip to content
This past weekend, I hopped on the Bolt Bus and headed to Boston for my cousin’s wedding.  Sure, I would have preferred warmer weather conducive to walking tours of the city, but I was content to explore the city in the cold because I have no idea when my next visit will be.  Right as the bus pulled into Boston, I received a text from Jen that her water had broken and we could expect a little cutie by morning so Matt and I decided to head to the bar to celebrate and kill time before our parents arrived.  But where to go?  The bellman looked about our age so we asked him if he knew of a decent local spot within walking distance and he directed us to McGreevy’s.  It took a while to understand his directions – I was pretty sure he was Slovakian or something…nope, his Boston accent was just that thick.  Once we deciphered the dialect, we found our way to the pub, which played good music and seemed to have a nice Bostonian crew.  I’ll say it was a good choice minus the fact that they were out of Jack.  I settled for a Makers and Diet instead but remarked at every sip how odd it is to run out of Jack Daniels.
Day two commenced with one goal and one goal only: lobsta rolls.  Not lobster – lobsta.  Someone said Faneuil Hall would be a good area to try so we headed in that direction.  Turns out Faneuil Hall is like a giant mall food court so we bee-lined outta there in search of something more authentic.  We stumbled upon a string of Irish pubs and picked the Green Dragon Tavern.  Not the best lobster roll I’ve ever tried (lobster salad instead of chunks and baguette/hoagie instead of buttered hot dog bun) but it was still tasty.  Then again, it’s lobster and mayonnaise.  It’s hard to be bad.  The name had me thinking it was a Chinese restaurant, but it is actually Irish (like a huge portion of Boston’s population) with tons of history.  Paul Revere and John Hancock were regulars and, in fact, it was this bar in which a child overheard plans of the invasion of Concorde that instigated Revere’s famous ride: “The Konters are coming!”

It was just a short walk to the North End, Boston’s Little Italy, so we marched that way for dessert.  You can’t go to Boston without trying Boston Cream Pie and if you’re going to get it, you might as well get it from one of the most famous places around, Mike’s.  The cake was light, the fudge thick, and the cream was somewhere in between.  Between the lobster roll and the Boston cream pie, I thought I had accomplished all necessary Boston food missions.  But then we walked by the Daily Catch restaurant and did a double take at the window.  There was a couple eating a mondo bowl of seafood pasta with an entire lobster propped on the side of the bowl.  I started drooling.  We were too full to eat but believe me, a mental note was made.
Friday night was rehearsal dinner night and we all boarded buses to Cambridge.  Now I get why Harvard is so hard to get into – everybody must want to live in Cambridge!  It is an adorable town that I wish I had been able to explore.  The restaurant, Upstairs at the Square, pulled together a great meal.  Flatbread pizza, tuna tar tar, and chickpea French toast were passed as hors d’oeuvres – perfect for mingling.  For the dinner, we had a choice for each course (but didn’t have to tell the hosts beforehand – a nice touch).  Both options for course number one looked good so Matt and I went halfsies.  The beets with arugula and horseradish panna cotta was good (especially if each element was in a given bite), but the horseradish was a tad overpowering.  The artichoke soup with dumpling and sorrels was amazing.  Licked the bowl clean.  For course number two, Matt chose the spinach crusted cod.  I had a bite and will confirm it was light and delicious.  Did I taste miso?  I went with the vegetarian option.  This one wasn’t listed on the menu and I certainly didn’t think to ask what it was since I’m a major carnivore (I thought the cod was the vegetarian option), but our sneaky waiter gave us the down low.  I did not expect wild mushroom risotto with parmesan and figs to pop up as the veggie option (usually it’s rice pilaf with steamed broccoli and carrots), but I’m so glad our waiter filled us in on the secret.  For dessert, most people went with the rich chocolate semifredo, but I got the white chocolate cake.  It didn’t taste like white chocolate per se, but it was very good when combined with the citrus sorbet, homemade cream, and passion fruit that joined it on the plate.

On Saturday, we hit up the aquarium (a favorite pastime of mine) and I learned tons of interesting facts about our friends in the mysterious fathoms below.  We still couldn’t get that Daily Catch restaurant out of our heads so we headed back to the North End to get some of the ridiculous looking pasta.  We arrived to find a long line outside.  I suppose everyone was at work/not touristing when we walked by the first time at 2 PM on Friday, but by 1:15 on Saturday, they had all congregated there.  It was cold, but we were not willing to back down so we stood outside for 45 minutes for out chance to sample what we were sure would be fantastic Italian food.  The restaurant itself is a kitchen.  Really.  It is a tiny kitchen with a few tables set up across the stove, enough to seat about 16 people.  We were determined to be three of those 16 even if our toes would go numb in the process.  We made it inside right at 2 PM and ordered immediately (we’d had enough time to stare at the chalkboard menu through the window during the wait).  The restaurant (around since 1973) is nicknamed Calamari Café because squid is their specialty.  I am never one to eschew anyone’s specialty so we ordered the calamari sampler – a giant plate of marinated calamari salad, fried calamari, calamari meatball (moist and unique flavor), and fried fish.  We also ordered the homemade black pasta (the house favorite) with ground calamari (didn’t know this was done but I liked it), oil, and tons of garlic.  It came in a skillet that we wiped clean with crusty bread.  It was an unbelievable meal and my father claims it was the best pasta he can recall ever eating.  Worth the wait.  Worth five waits. 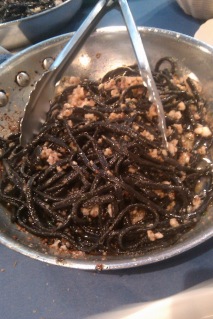 There was so much food at the wedding that I can’t list it all off here, but it was all good (especially the grits and pulled chicken with peach salsa).  For once, I was less focused on the food because I was so mesmerized by the setting.  The wedding was held at the library and since I’m a huge reader, RESPECT!  It was gorgeous.  If you’re planning a Bostonian wedding, do it here.  We ate in the actual reading room.  Like with books on the wall and those cute green reading lamps lining the long tables.  The main event was the perfect culmination of my Boston wedding weekend – cheers to the bride and groom and thank you for letting me experience a new town and all the great food it has to offer!