Sometimes you taste something that doesn’t belong…but you like it anyway.  That’s what happened to me when I tried the frozen yogurt at Victory Garden.  It’s fro yo that’s made with goat milk.  The inevitable first question is whether or not it tastes like goat cheese.  It actually does.  It has all the tang of goat cheese that kind of makes the sides of your tongue curly upwards like the whale in Free Willy, but it’s sweet.

Using goat milk supposedly makes this yogurt a little healthier.  And as is bound to happen when someone waves the healthy wand over something that’s supposed to be bad for you, something has to give.  For me, that something was the toppings, which seemed a little off the deep end – vegan fudge is an option, you know?  The goat milk flavor is unique enough that it doesn’t need much.  Maybe a little granola or something non-vegan and you’re all set. 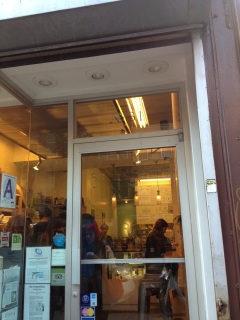