Ivan of Ivan Ramen is a Jewish guy from Long Island who moved to Japan after college (it was what he had studied) and while there decided to open up a ramen shop.  I’m not sure why he thought he could go toe-to-toe with actual Japanese chefs in a niche cuisine that is so true to their own culture, but his restaurant became a huge success. About a year ago he decided it was time to bring his famous ramen back to his home country and opened a stall in the Gotham West Market food hall, where I recently dined.

There was a roundness of flavor to the soy sauce base of the ramen that I liked.  I also liked the cut of pork itself.  I was hoping there would be a few more toppings like bamboo shoots, seaweed, or bean sprouts.  I thought $2 to add an egg seemed pricey for a bowl of ramen that was already $12…but was pleased to see it got me both halves of the egg and I thought it was cooked to a perfectly creamy center. 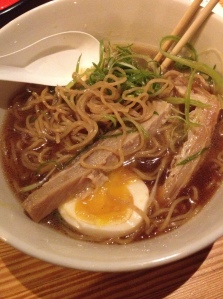