On a Monday morning Albert texted to tell me he realized our train tickets had not been clipped the previous Saturday, which means we had basically just won a free trip back to Arthur Avenue.  As a deal-loving gal, a free train ride would always make me happy, but I was particularly enthused now that I had experienced Arthur Avenue.  It was all I dreamed of and more!

Many NYC tourists love to take a walk down Mulberry Street for their taste of Little Italy.  It’s fun, but it’s not authentic.  I learned a year or two ago that if you want a real Italian experience, you leave the island of Manhattan (but not the five boroughs) and head to the Bronx.  Arthur Avenue is where it’s at.  An 18 minute Metro North train ride ($12.50 round trip) will take you to the Fordham University stop, just a few blocks away from the famed street.  If you like  food in general, Arthur Avenue should definitely be on your list.

Our first stop was Cosenza’s Fish Market, where we were attracted by the tables set up outside as a raw food bar.  We ordered a dozen oysters (ranging in price from $1.50 to $2.75 each) as a way to fuel up before the rest of our food journey.  Next it was time for lunch and I thought sandwiches would be our best bet so we went to the Arthur Avenue Retail Market and grabbed a spot at Greco’s/Mike’s Deli.  The food is served on styrofoam plates – no frills here – but it’s better than just about any deli sandwich I’ve had.  We split the Da True Bronx Tale sandwich (mortadella, mozz, provolone, and tomato) and the porchetta (roast pork, mozz, and sweet peppers).  I preferred the Bronx tale (it was like a whole antipasti platter on a sandwich) while Albert liked the porchetta better.  I can never resist burrata and knowing that this would probably be the best I’d be able to get, I made sure to order.  It came bruschetta style with radicchio and crispy speck.  The cheese just melted.  Gah.  On our way out of the retail market Albert picked up some cigars to give as a gift.  Just like everything else in this magical place called Arthur Avenue, the cigars were fresh – as in a guy was rolling them in front of us.

After lunch we had to make some tough decisions.  I knew I wanted to bring food back since the quality was amazing and the prices way better than anything I could find in the city.  Between oysters and lunch I had poked my head in just about every store there was and now I had to pick my favorites.  I thought Cosenza’s had the best fish selection so we went back there so they could pack some swordfish on ice for me.  Then I went back to Vincent’s Meat Market for some broccoli rabe sausage and stuffed pork chops.  Then I went back to Casa della Mozzarella for olives and artichokes.  It was here that I learned Tony Bennett was in the hood.  All the older Italian ladies started going crazy in line.  The same line, I might add, that Chaz Palminteri stands in every couple months for his mozz fix.  He grew up in the area and based “A Bronx Tale” on his Arthur Avenue experiences.  While I loved the reinforcement that I had found the legit Little Italy, those ladies swooning over Tony Bennett inadvertantly gave me the best tip of the day.  They told me if I wanted to catch Tony, I should head to the ravioli store.  The one thing I wanted to find on my Arthur Avenue adventure was fresh pasta and I had thought I’d be going home empty handed – turns out I just needed to walk one block over from Borgatti’s!  The ravioli looked amazing but I decided to get some basil pasta (only $4.95/lb).  After weighing out a pound of pasta sheets, the boy at the register handed me a laminated sheet of paper and asked for me to point out a number.  Each number (1 through 6) corresponded to a pasta size.  I went with 6, which was between a papardelle and tagliatelle, and watched as my pasta was hand-fed into the machine and cut to order.

If you’re keeping track, I purchased a lot of food: 1 lb swordfish, 1 lb sausage, 2 stuffed pork chops, 1 lb olives and artichokes, and 1 lb fresh pasta.  My total was $45.  If you don’t realize what a great deal that is, you must not be the one doing the grocery shopping for your household.

The tourists can have Mulberry Street.  I’ll keep this authentic Little Italy all to myself. 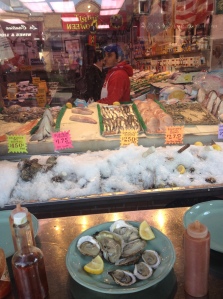 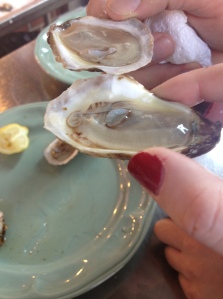 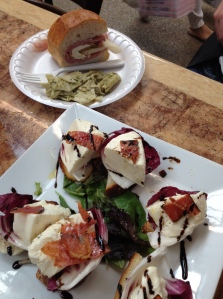 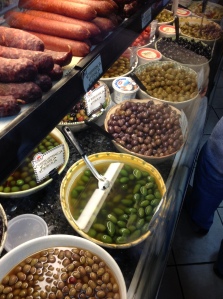 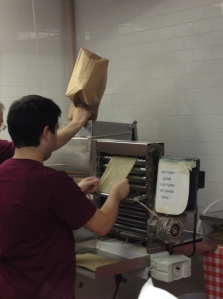