On our last day of freedom – I mean, Xmas break – Albert and I wanted to get in one last good walk and great meal so we could end the vacation on a high note.  Albert suggested I pick up the latest New York Magazine and pick a place from Adam Platt’s “Where to Eat 2015” list.  We wanted something light and cheap so many of the restaurants in the guide were nixed right off the bat, but the critic is usually good about putting a good mix of high/low in his reviews and we found the “low” in The Bao.  The review was simple and actually only took up one half of a sentence before moving onto another restarurant for the other (longer) half.  “The Platt family’s favorite new venue for classic soup dumplings in the neighborhood is The Bao, on St. Marks Place…”  That’s all he says.  In a weird way, that gave me more confidence.  He kept it short and sweet and put all his dumplings in one basket.  It was like he said “this is the best so why keep discussing it?”

We were eating late and wanted to keep it light to avoid ruining dinner so we split an order of pork fried rice and the kung fu xiao long bao, or soup dumplings.  I’ve gotten used to eating take-out fried rice and forgot how good it could be.  It doesn’t have to be dried out.  The onions were translucent and the bits of pork were sweet and juicy.  Now onto the reason we (and everyone else) were there: the soup dumplings.  Before you ask – yes, I have been to Joe’s Shanghai.  These were better.  WAY better.  The biggest difference is in the skin.  It was nice and thin unlike other soup dumplings which can have a thicker, gummier skin.  And yet, it didn’t tear.  Not one dumpling broke as we picked them up with the tongs and carefully placed them in our spoons.  I think that’s also because they weren’t oversized.  That means you’re less likely to look silly when you’re eating them…though for dumplings that tasted this good, I wouldn’t mind looking silly. 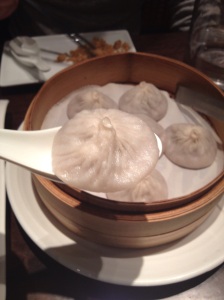