I am generally wary of Asian restaurants that have food from all around the continent.  They might be in the same general area of the world, but Japan and Thailand or two very different countries that highlight very different flavors in their cooking.  Beyond the prevalence of rice, these are totally different cuisines, people.  Despite the wide-ranging menu, it was Bill’s birthday dinner and he had been to Okko before so I trusted him.  After all, his granddaughter has been eating sushi since she was 2 and has quite the discerning palate.

For the first time, I found the restaurant was able to properly cook all the items on the menu.  My Mom ordered a Thai ginger chicken dish that I thought was just as good as any of the sushi or hibachi we ordered.  I don’t like to go crazy with the sushi (let the fish do all the talkin, I say), but if you’re into tempura fried rolls with cream cheese, there are about 40 to choose from.  Every person at our table was looking for something different and we all went home happy, including one-year-old Brooks who gave the steamed dumplings a big thumbs up.  Well, he gave them a high five; he hasn’t mastered the thumbs up yet.

Here’s the other thing: the ginger dressing on the salad was top notch.  I judge all Japanese restaurants by that ginger dressing.  Too sweet or watery and I’ll never go back.  Other highlights: the octopus salad was a generous portion – not supplemented by a heap of daikon radish.  I was also pleasantly surprised to find that my spicy white tuna roll was chunks of white tuna with just a little sauce instead of ground up fish in a ton of mayo.  The treasure island appetizer (pictured) featured large chunks of fish, beautiful avocado, and just enough sauce.  And the prices were so much better than in New York!  Hilton Head is a resort town, where they usually jack up the prices, but this was cheaper and tastier than my NYC neighborhood sushi.  Okko is OK by me.  That was cheesy.  I’m sorry I ended this blog post that way. 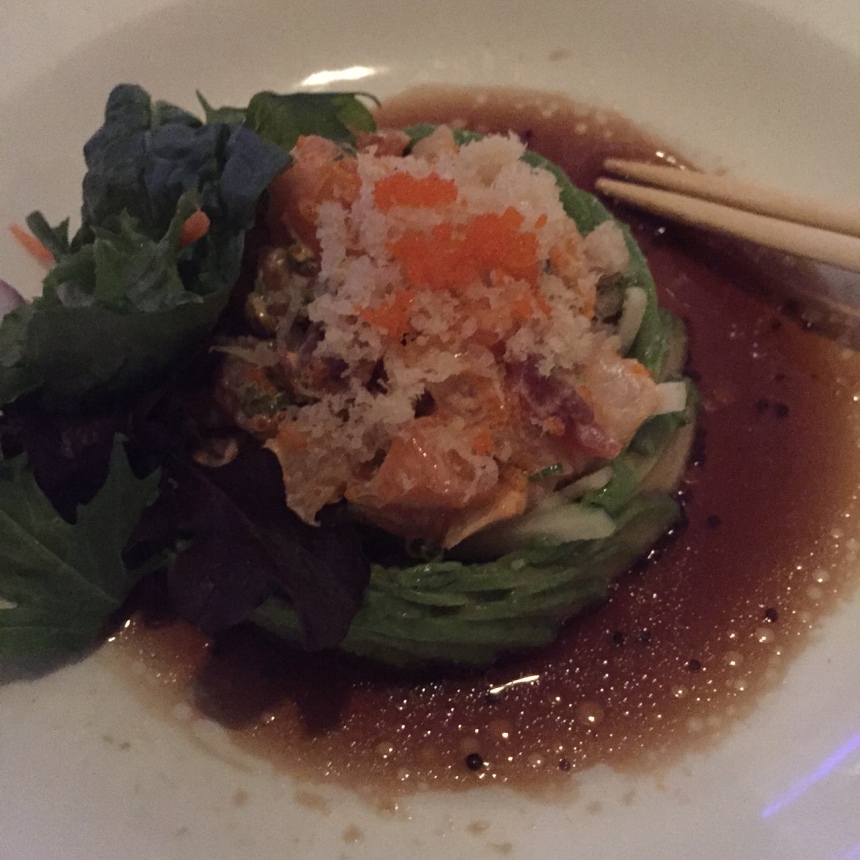