I love that slight onion-y taste of leeks and the fact that Trader Joe’s sells them already trimmed when they’re in season.  It makes it so easy.  I love slicing them up and adding them to sauces and roasted veggies.  This recipe goes the sauce route and is so super easy.

The recipe’s author suggests getting chicken breasts and slicing them into thin cutlets (in case the grocery store doesn’t carry the pre-cut cutlets).  I used the chicken tenders, which was just as quick-cooking as cutlets so go with those if you happen to see them in the store.  Two other changes I made: 1) I added a clove of garlic and 2) I used fat free half and half.  Using fat free half and half instead of regular half and half or heavy cream makes this way way way healthier.  It does, however, mean the sauce might not thicken up quite the same way so you may need to add a little corn starch.  Also, because of however fat free half and half is made, it might separate a bit and look kind of grainy.  Don’t worry about it.  It will still taste just as good.

Obviously this would be great over rice or pasta so there’s something carb-y to soak up the sauce.  Instead, I went full seasonal with this meal and served my chicken dish alongside roasted root veggies.  I highly recommend the frozen blend from Trader Joe’s.  If I was roasting root veggies I would probably do one or two types…and definitely not beets because I would stain everything in the house.  Their melange includes julienned parsnips, carrots, beets, and sweet potatoes.  It takes 30 minutes to heat up in the oven, which – whaddaya know – is exactly the amount of time it takes to make this chicken dish from start to finish. 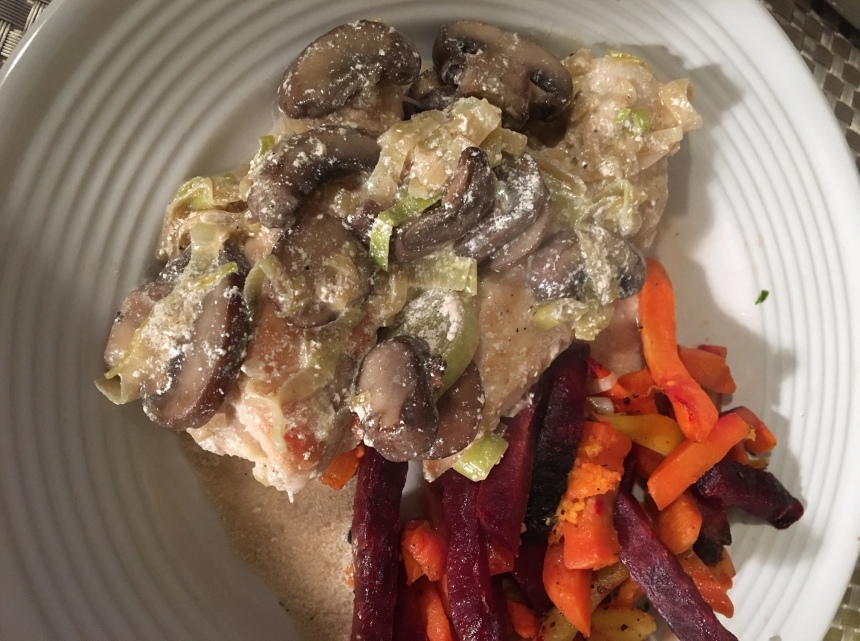