I envy my cousin and her husband.  They eat at dell’anima literally once a week.  It’s relatively known that my own goal is to become a regular at a restaurant where they know me and know my order.  This has been my ultimate goal for years.  Not only have they achieved that status, they’ve done it at what’s considered one of the top NYC restaurants.  Brava.

Natalie and Jordan seemed to know exactly what to order so we pretty much let them run the table at our cousins dinner when Sarah and Aunt Alice came to town.  We ordered the bone marrow and octopus to start, the chicken and duck to share around the table, and then we each ordered our own pasta.  I’ll hand it to them – they knew exactly what to order.  I’m a bone marrow fan – it don’t scare me.  But this bone marrow was unlike any I’ve had before.  It was like the marrow version of a restuffed potato.  It was so rich, almost like bone marrow paté, and I loved it.  It was particularly good with the pickled red onion on top.  Bone marrow is something I always enjoy.  It’s one of those rare treats that’s always delicious and a bit decadent.  But this is the first time I’ve ever been surprised by the dish so I really have to hand it to dell’anima there.

The octopus was also great.  I’ve never had rice beans, but I enjoyed them immensely.  I’m not a huge fan of large beans (white beans, limas), but these were almost like pigeon peas, which are by far the best beans because of their size and texture.  Yes, there is a bean hierarchy in my mind.

Jordan raved about the chicken, despite it being the thing no one ever wants to order at a restaurant.  But he was right.  It was perfectly roasted with – I think – smoked paprika on the skin to give it a wonderful smokey spicy-ish flavor.  The duck was a seasonal special and lovely with roasted pears on the side.  Not too oily as is often the case with ill-prepared duck. 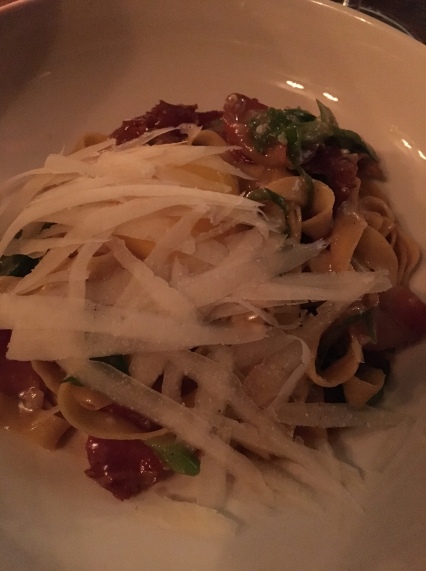 I was so excited about the pasta because I had seen it on many a social media post.  I knew this was going to be good, and dell’anima did not disappoint.  I went with the carbonara because I had heard so many good things.  They didn’t overdo it with the cheese so it was the lightest carbonara I’ve ever had.  You can’t see it in the pic (above left), but there was a gorgeous egg yolk perched on top (underneath the parm shavings).  I also tasted the bolognese.  Like the chicken, this is one of those items you don’t usually want to order since it’s the one you likely most often make yourself at home.  But it was perfect.  I was a bit jealous I didn’t get it for myself.

Apologies for poor picture quality.  The lighting in dell’anima is dim.  Bad for foodie pics; good for gazing lovingly into your  date’s eyes.