Being solo was no reason for me to give up my beloved Taco Tuesday.  In fact, with my beau out playing in a softball tourney, it gave me the chance to try one of the veggie taco recipes I’ve had on my to-do list for a while.  I’m not one for fully vegetarian meals, but sometimes I like to try it out as a way to test myself and see if I can handle being meat-free…is that weird?  After watching Chanie make refried bean tacos on her Instagram Stories feed, I decided to give the recipe a try…with a few changes.

The first and biggest change was the main ingredient.  I’m not really into refried beans.  So why make a recipe based around them, you ask?  Well I had a theory that I didn’t love refried beans because I’m not a huge pinto bean fan.  I do, however, like black beans so I thought it could work to use the same process on a more preferable bean.  And it worked, my friends. 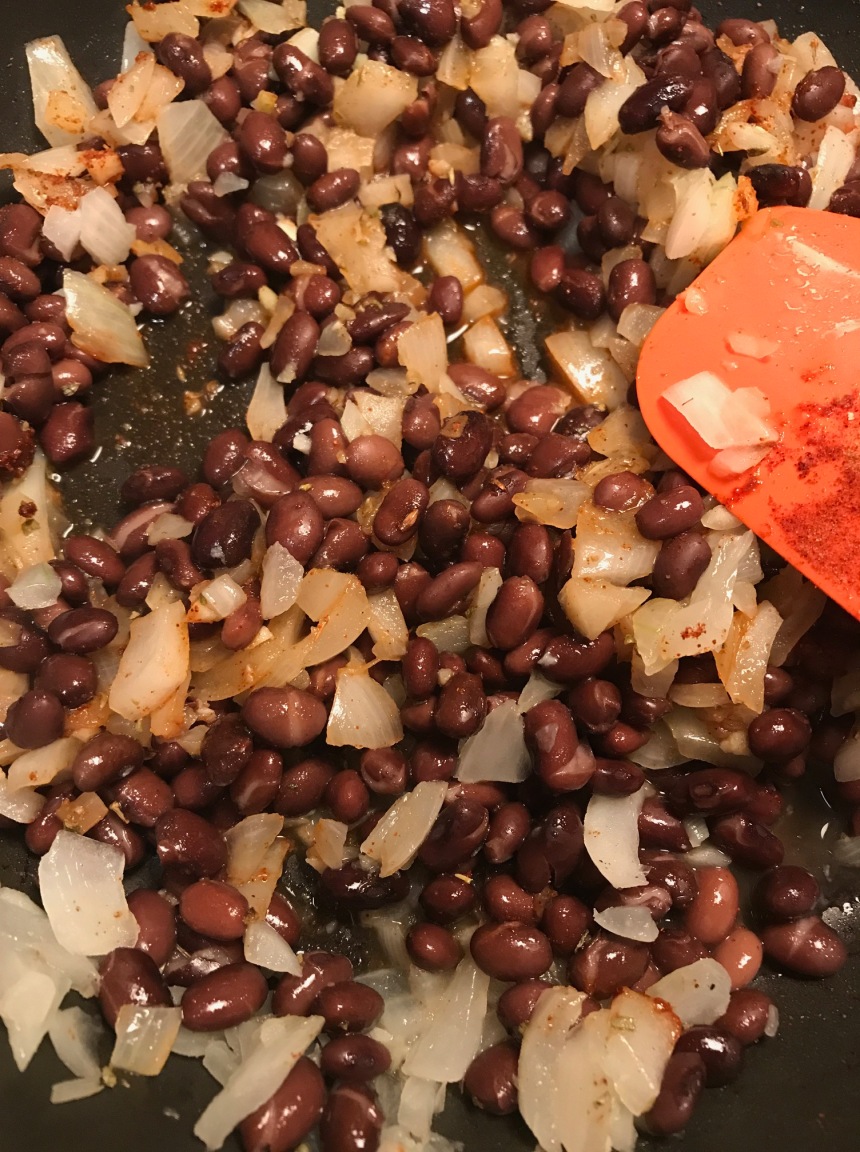 First, prep your ingredients.  Chop one small onion, mince one large clove of garlic, and drain/rinse one can of black beans.  Now it’s time to start cooking.  Start by sauteing the onion in some olive oil until it’s nice and soft.  You’ll want it to really soften so it will be easier to smash later.  Since it takes a minute to get to that stage, this is a good point to prep your star topping: slaw.

Adding slaw as a topping is my other big adaptation to this dish.  Since your protein doesn’t have much bite, you need something crunchy to help give this dish some substance.  Mix red cabbage (or any slaw – I used a kale/cabbage mix that was the only thing left in the store and it was great) with equal parts mayo and sour cream.  Stir in hot sauce to taste.  Set aside. 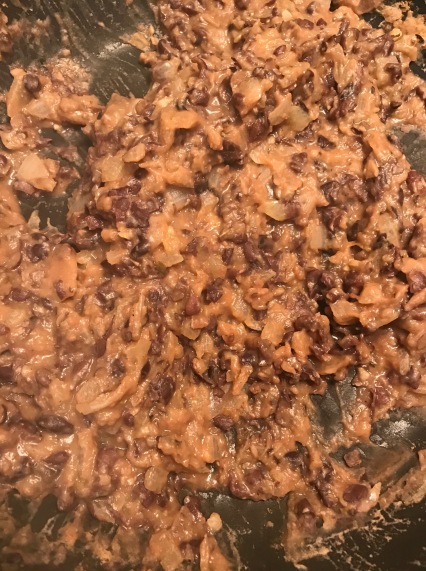 Now, back to that onion.  Once it’s good and translucent, add the garlic, saute for about 30 seconds more, and then add your black beans.  Sprinkle in taco-y spices (chili powder, cumin, oregano, paprika) and add 1/2-3/4 c. water and simmer a few minutes til the beans have softened and the liquid has reduced.  Now just mash away with a potato masher til it gets to the desired consistency.  If you like it extra smooth, you can always use an immersion blender – that’s your prerogative.  I like it to retain some texture.  If it looks too dried out, simply add a bit more water.  Once they look good, squeeze the juice of half a lime over the whole thing. 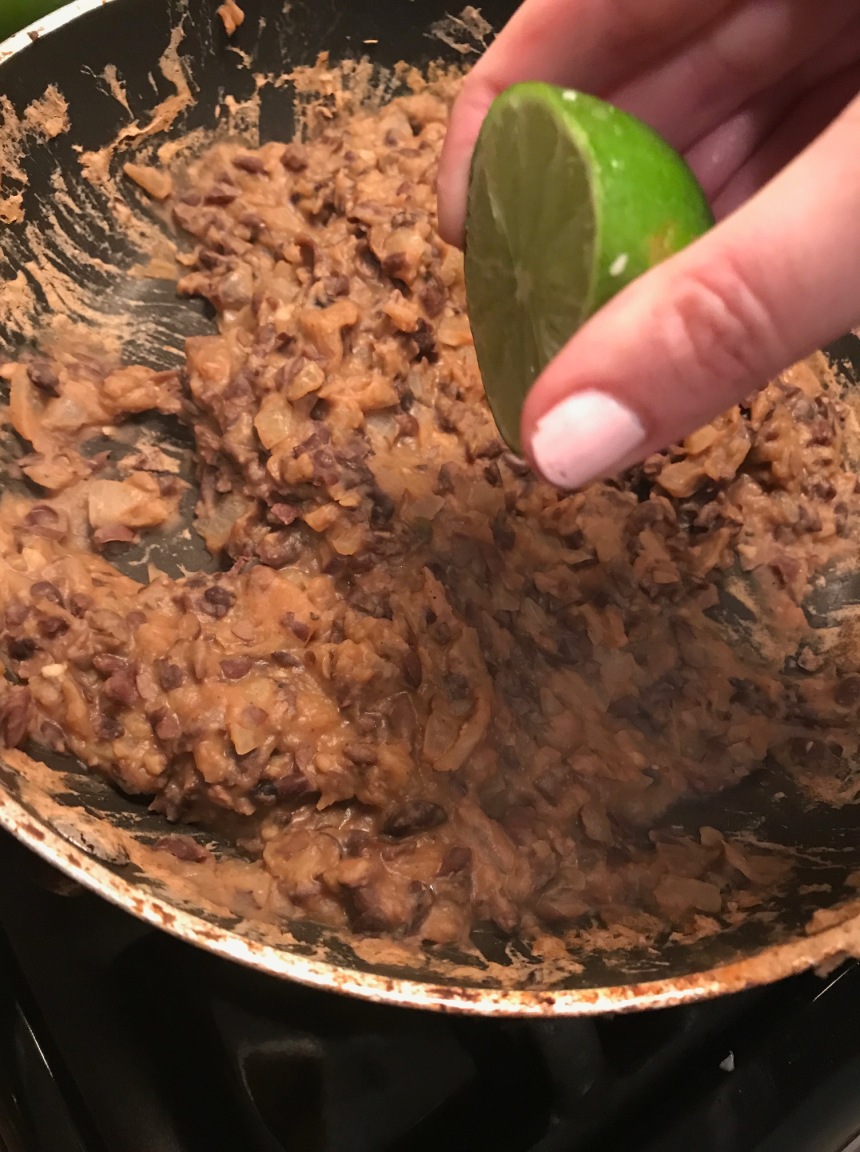 Now it’s time to assemble these puppies and I highly recommend you do it right in the pan.  Simply place a tortilla in a dry pan, top with the bean mixture, and sprinkle on some shredded cheese.  Tent with some foil until the cheese melts (before and after shots below).  Remove the tacos from the pan and top with remaining ingredients (that slaw you made before and some chopped tomato).

Straight in the pan is the best and only way to make these tacos for three reasons: 1) it gets the tortilla (especially corn ones) to the proper texture 2) it keeps the beans warm (room temp beans taste like they’ve been sitting out for a while – no bueno) and 3) it melts the cheese, which just seems preferable.

These tacos were totally filling for something that contained zero meat.  That said, when Albert’s game ended early and he made a surprise appearance at the supper table, I simply added some rotisserie chicken to his taco and he was a happy guy.  It’s Taco Tuesday…what’s there to be unhappy about?!