Welcome to Travel Tuesdays!  I’m not sure this will always be a thing, but I have a lot of travel content coming up so I figured why not try to make it a recurring series?!

The first 4 days of of our honeymoon were spent in the Tuscan countryside.  It may have been my favorite part of the whole trip!  Warning: this post will be JAM PACKED because we stuffed more sights/attractions into this portion of our trip than most other destinations on our honeymoon.  Note: in this post, I’ll share all of our activities but don’t worry; up next will be a post covering all the food we ate!

We flew into Florence and drove directly to Siena – we really hit the ground running!

Fun Fact: we packed for all 16 days in carry-ons because we we had plans in Siena at 8:30, our flight landed at 5:30, and it’s an hour and a half from the airport – no time to wait for luggage at baggage claim!  I’m actually quite proud of myself for packing everything in the one bag.  See this post to learn how I did it.

The reason we were so rushed to get to Siena was because we had planned to go to the Palio.  When I found out about this crazy awesome thing, I actually planned the order of our trip around it.  Basically, the Palio is an annual horse race in Siena that’s a pretty huge deal.  Let’s back up.  The coolest thing about Siena is that the walled city is still pretty medieval.  The city is divided into neighborhoods, or contrada, that operate as clans that you’re born into.  Each contrada has a mascot and colors and traditional enemy contrada.  Yes, for real.  Every year, 10 of the 17 contrada compete in a horse race (some receive automatic entry, others by lottery) and the entire city goes NUTS.

In the days leading up to the main event, there are dinners and celebrations, the biggest being the dinner the night before – that’s what we were rushing in for.  Each contrada hosts a massive dinner in the middle of their neighborhood with food and all the wine you can drink.  We were staying in the Onda neighborhood and went to their dinner, making friends at the long tables that took over a cobblestone alleyway.  There were about 700 people there – and that was only our contrada!  The excitement, especially as the jockey walked in to take his spot at the head table was electric.  Getting spots at the dinner was not cheap, but it was such a unique experience – totally worth it.  We were swept up in the event and fully adopted the contrada as our own.  I was happy we landed in one that seemed to be pretty cool – good flag, fun neighborhood – so we decided to support them in the race the following day.

Before the race, however, we had several hours to explore the city.  We walked in an out of cobblestone alleys, hiked up to a panorama, checked out the duomo, and walked to the edge of the city so we could take in the immensity of the gates.

I’m so happy we took some time to check out the duomo – it was probably my favorite duomo of the entire trip (and we saw a LOT of cathedrals in 2+ weeks, believe me).  It wasn’t the biggest, but it was absolutely stunning with the black and white marble in a striped pattern.

After walking  around the city and having lunch, it was time to head to the Piazza del Campo for the main event.  That’s what’s insane – this horse race is held around the main square in the center of the city.  You can choose to watch in a pit in the middle of the piazza (free or inexpensive, I think), in the grandstands (what we did – several hundred dollars but a great view and well worth it), or in an apartment above the square (even more expensive).  The apartment affords you a bathroom and comfort, but you’re not in the middle of the action – I’m very happy with our choice.

The event begins with a parade of all the contrada in their colors with flag throwers and armor.  We were living in a Renaissance fair…except it wasn’t fake.  The parade takes at least an hour and a half and then it’s time for the race to begin.  We ran into some trouble here as one horse refused to get into starting position, delaying us for over an hour and almost cancelling the whole thing (turns out the horse was hurt and eventually disqualified – this is not something that happens often and apparently people were watching it on tv all over the region). 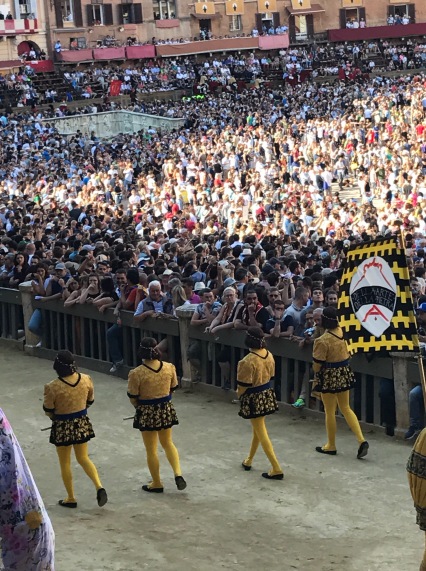 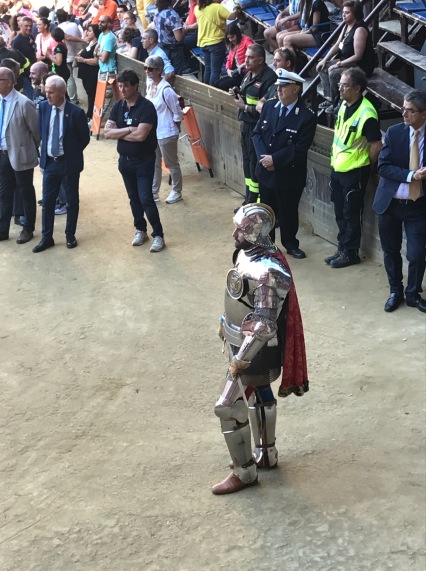 And then they were off!  The three laps around the track take no time and was thrilling to watch.  Sadly, we didn’t win (the Giraffa contrada did and stormed the square), but it was very fun to watch just the same.  After the race we grabbed supper and had a few drinks before going to bed.  Though invited to a big Giraffa celebration, we declined as we were waking up early for a wine tour, but I bet it was an epic party. 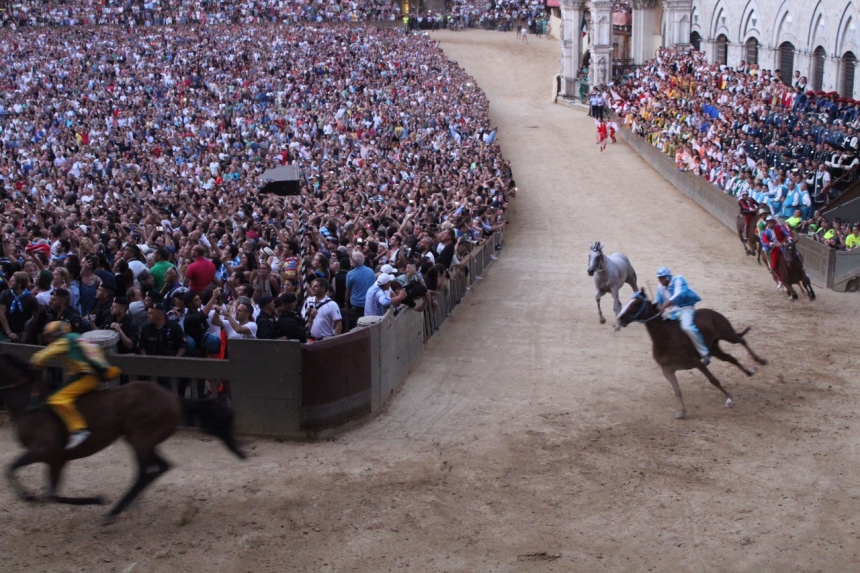 Panzano (nights of July 3 and July 4)

From Siena, we went to Chianti for some serious vino action.  We had a big activity planned for our second day in the area and through them, we found our hotel and driver.  Our driver, Daniele, picked us up from our Siena hotel at 9 AM on the 3rd and took us on a full day wine tour of the Chianti area.  We learned all about the type of wine and what makes something Chianti Classico vs. Supertuscan vs. table wine, etc.  Daniele, who is our age, was amazing.  He is from Panzano (a small town in Chianti) so he knew the area very well.  He took us to 3 wineries: 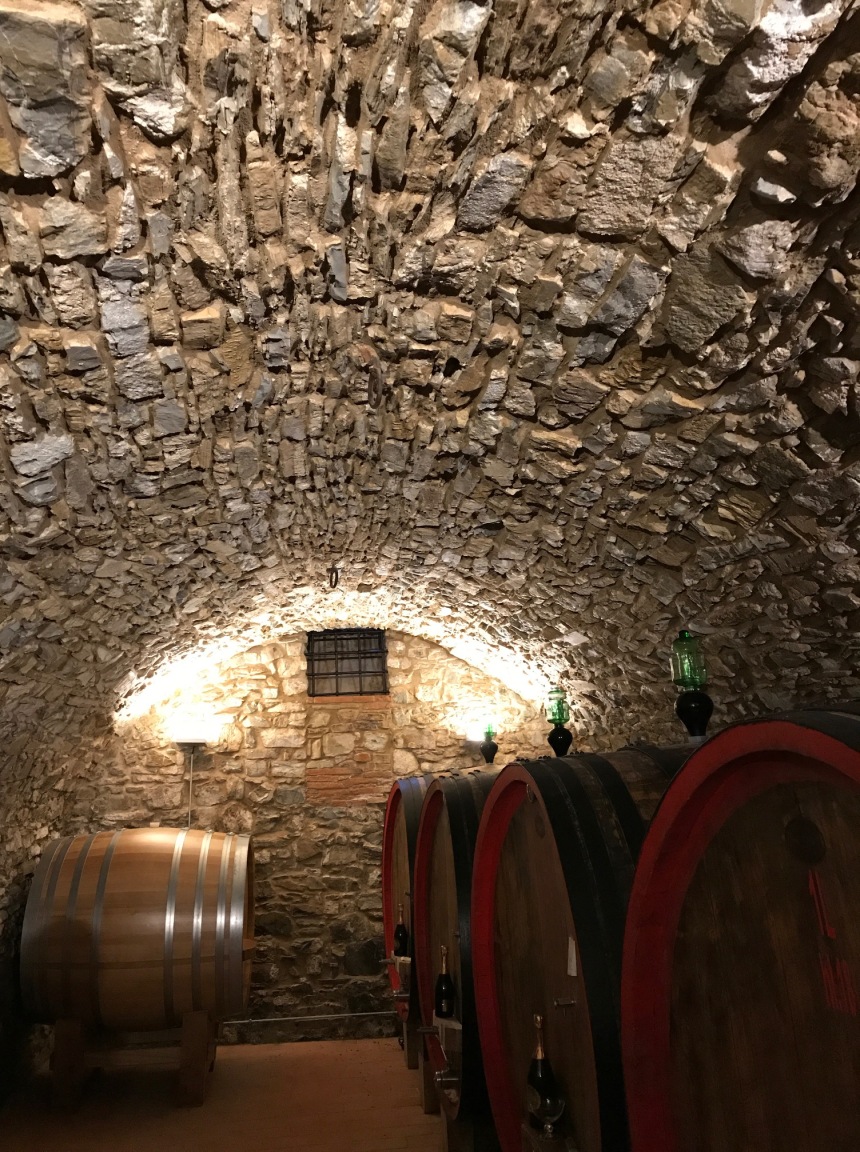 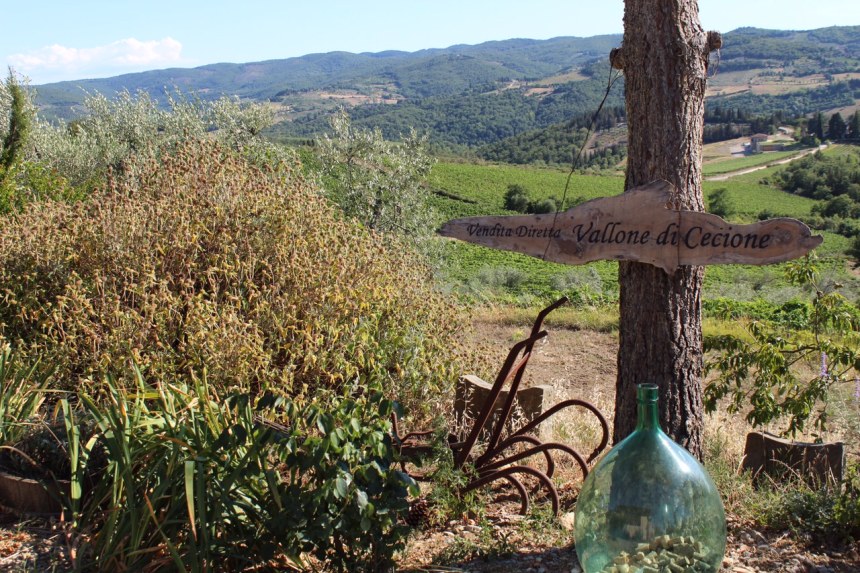 After a full day of wining, Daniele dropped us off at our B&B, where we relaxed a bit before heading out to supper.  We didn’t mind just hanging in the room for a few hours because we were exhausted from all the wine and we could tell there wasn’t soooo much to do in the town – it’s not like we were missing out.  That said, the town was quaint and picturesque so we enjoyed the views on our walks to supper.

The next day was spent as butchers.  Yes, butchers.  A friend had told us about the Butcher for a Day experience at Dario Cecchini maccheleria.  Basically, we spent all day behind the scenes at Cecchini’s shop, learning how everything works.  We first went to see the cows and small vineyard and then went to the warehouse/refrigeration building where we watched a highly skilled butcher work on a leg, learning all about the different cuts.

After touring the grounds, we made some sausage, then we cooked a little, and finally we had about a 10 course lunch.  It was incredible.  It was 200 euros per person but was one of the coolest things we did all trip.  In fact, I would say it was tied with the Palio as our two favorite experiences of our entire honeymoon.  Pretty crazy that both of them happened within the first 4 days of the trip – it made Tuscany a favorite spot.