I loooove that Summer Fridays exist.  It means I was able to catch a 3 PM train and make it to DC in time for dinner without taking any time off work.  Liz wanted to take me to one of her current faves, Himitsu, which doesn’t take rezzies and only accepts groups of four or less so flexibility was key. 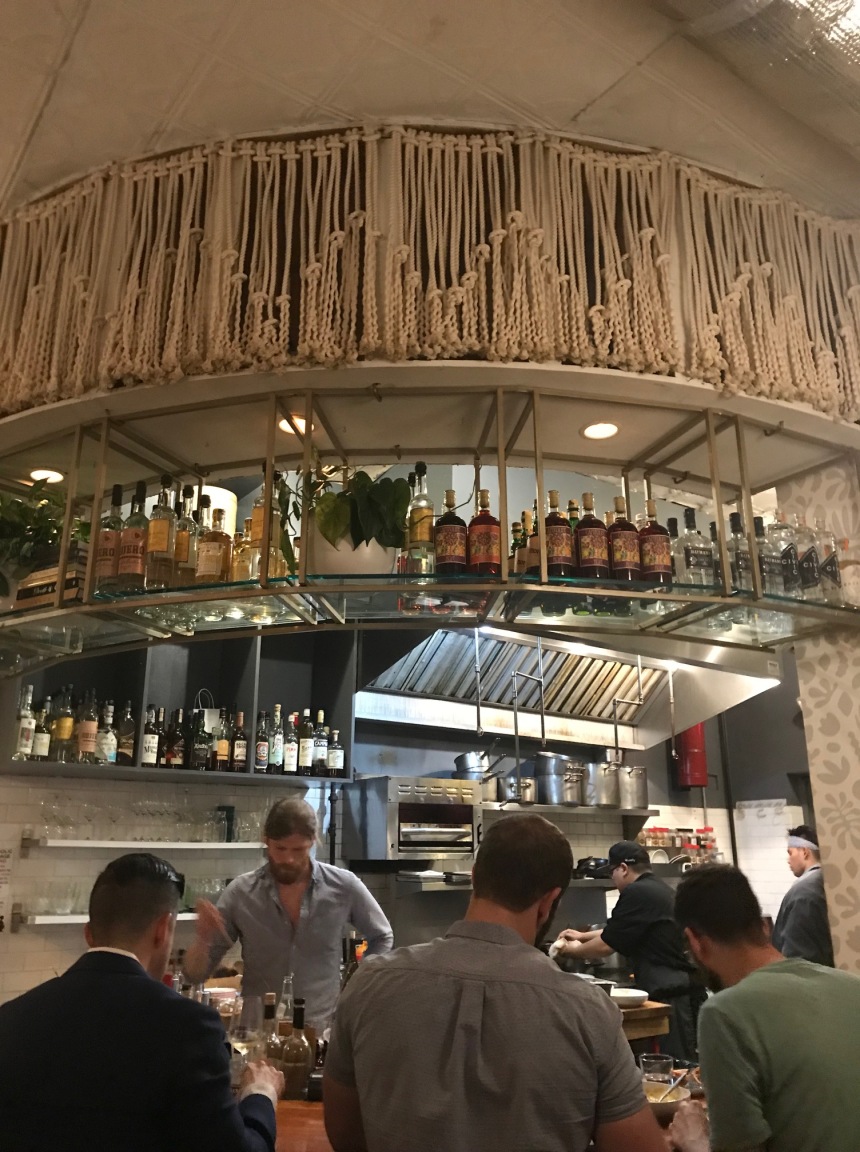 We arrived and were told it would be a 30 or 40 minute wait and they suggested we go across the street to Hanks for a cocktail .

HOT TIP: That was a good suggestion.  Hanks was cute with some funky little booths lining the wall and great cocktails, including the “dealer’s choice” wherein you describe your favorite spirit and flavor profiles and they concoct a cocktail.  It’s a great spot to hang while you wait. 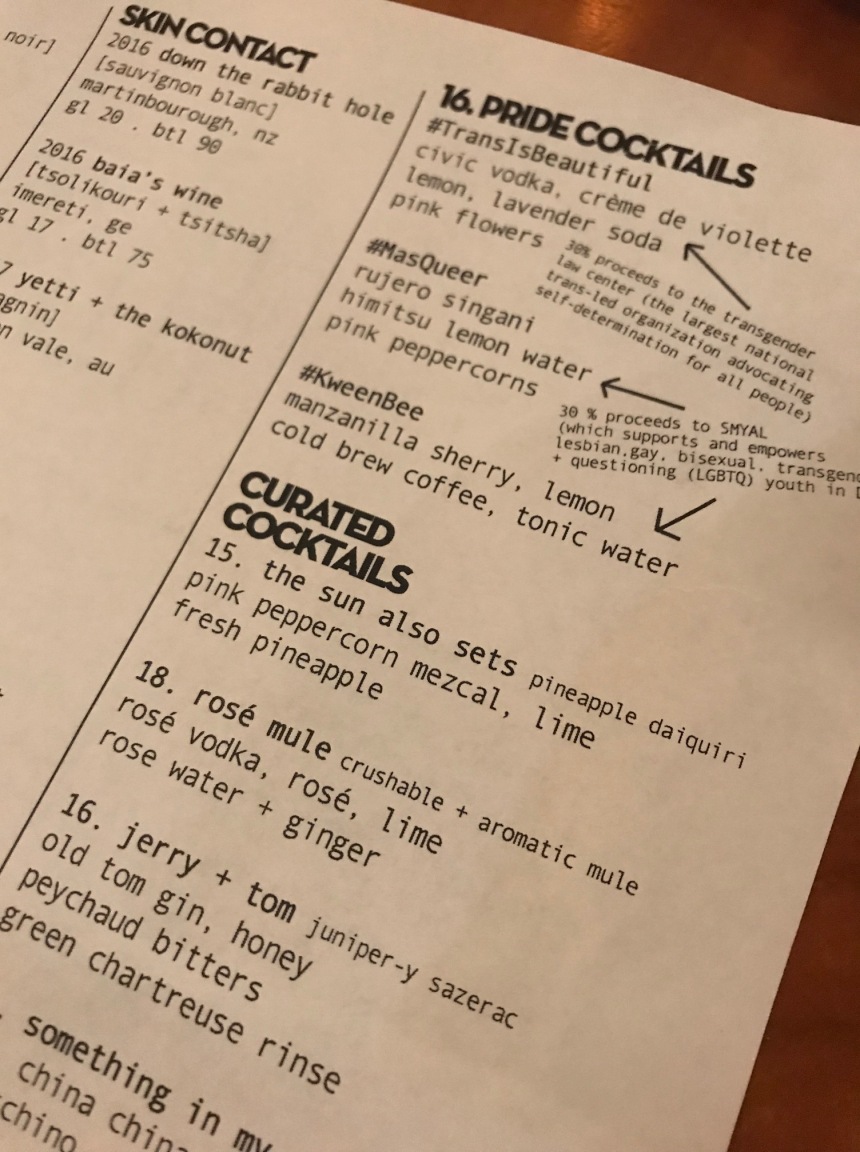 The restaurant is small but they managed to squeeze in some decor with the locally made macrame around the open kitchen.  That macrame was the first sign that they like to have fun with things and support the community.  The next sign was the drink menu, which – since it was Pride Weekend in DC – included drinks whose proceeds supported LGBTQ groups. Speaking of drinks, they were good.  Liz got the rosé mule and I got a mezcal pineapple cocktail.  Yum yum yum. 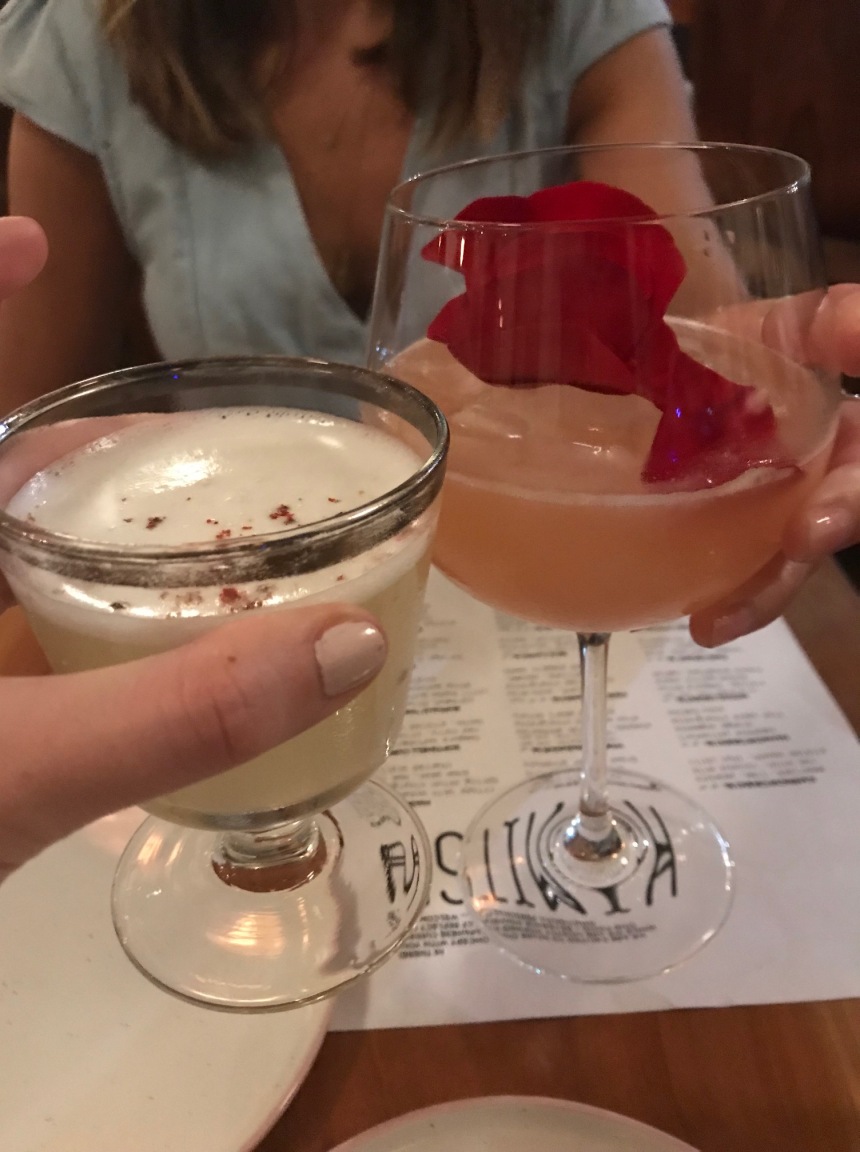 I’m going to pause for a moment to mention the one bad thing: I’m pretty sure they forgot to put in 2/3 of our order.  The menu is designed to be shared and only two of our six plates came out in an hour and a half timeframe.  Liz finally said something and they rectified the problem.  The food was good enough and the service was so friendly that once we got the rest of our food, we no longer minded.  Also, Liz has been to the restaurant several times and this is the only time she’s ever experienced a hiccup so I’m inclined to overlook it.

Now for the food.  The menu is divided into three columns that basically represent small, medium, and large sized plates.  They also represent crudo, veggies, and meat, respectively.  We went with one from column A, two from column B, and three from column C and it was a perfect mix of items.

First up, we had the hamachi crudo, which had orange, fish sauce vinaigrette, and yuzu tobiko.  There was a bit of piquant bite there…and then the citrus of the yuzu and orange…and then the perfectly cured yellowtail. This WORKED.  Even Liz, who doesn’t really do crudo, ate her half of this dish with vigor. 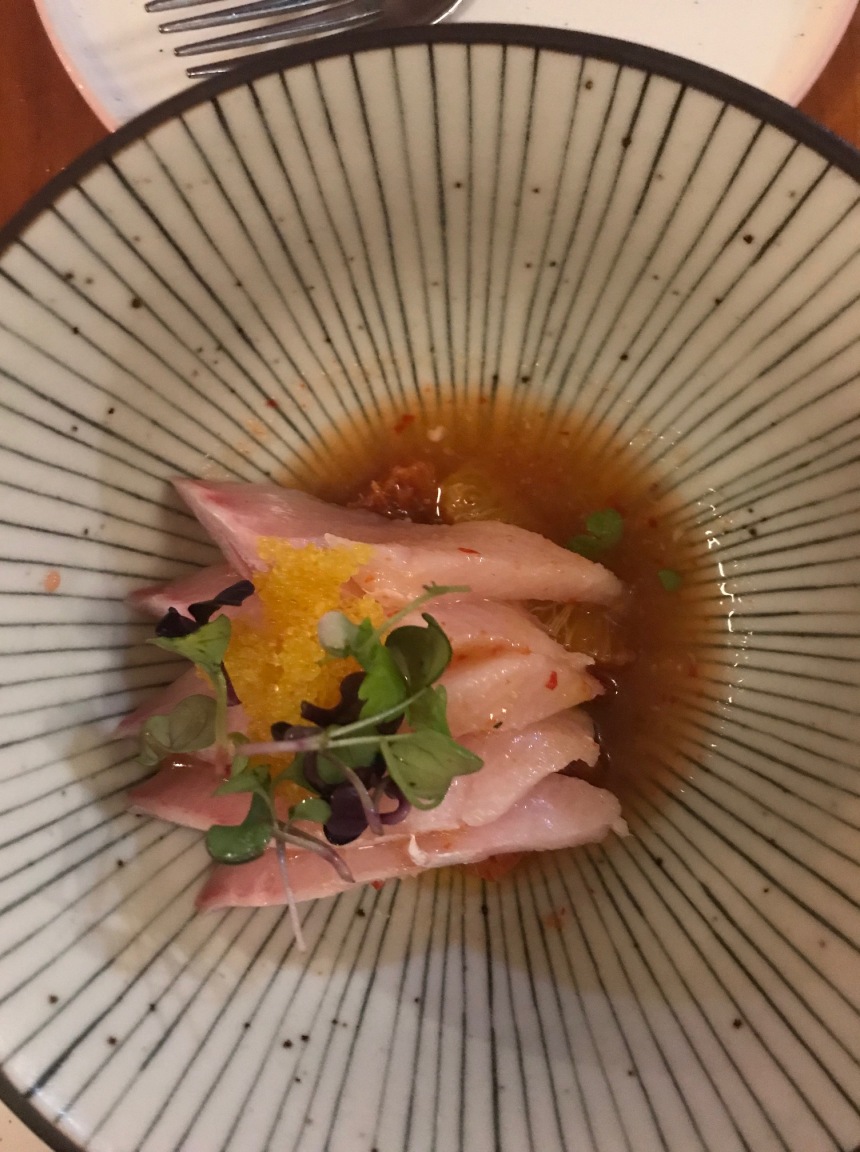 Next up we had an heirloom tomato dish with parsley sauce and toasted quinoa.  Honestly, this was the one and only item we did not care for.  I liked the texture of the toasted quinoa, but it was lacking salt and in general was bland.  We didn’t finish it.

Like I said, the tomato was the only dish we didn’t like, but we re-boarded the bus to flavorville with the next dish: charred broccolini with burrata, brown butter pine nuts, mint, and radish.  It was so so good.  I would like for that to come with all my meals moving forward.  It was also a perfect example of a “fusion” dish. 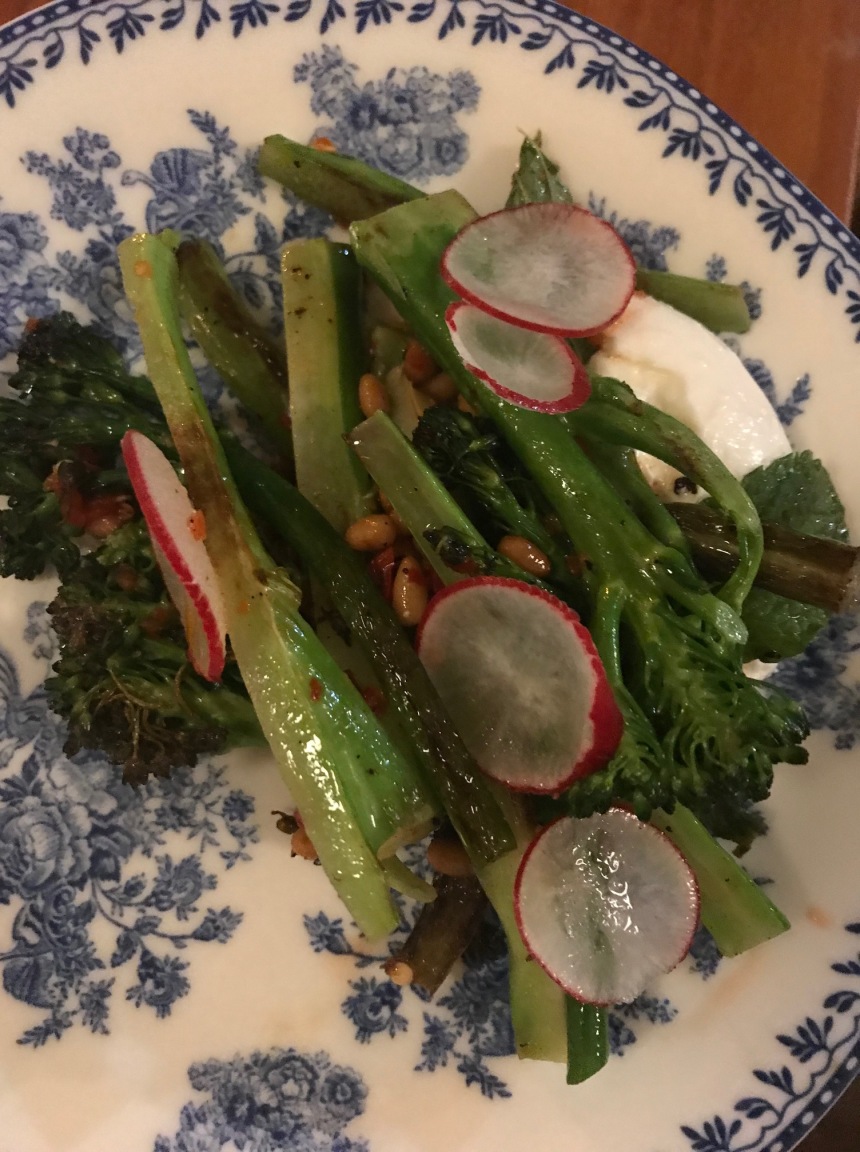 The first of the heavier items we tried was the buffalo catfish.  Fried catfish is a Southern staple, but I liked seeing it prepared this way.  Could have used more shiso buttermilk, but I really enjoyed the pickled carrot ribbons.  Next we tried the fried chicken with charred gem lettuce.  This is the restaurant’s signature dish so we had to try it, and I was not disappointed.  It was drizzled with their Himitsu sauce, which had a great umami flavor.  The best large dish we tried, however, was the crispy skin ocean trout with spring onion vinaigrette and bok choi.  This was the only dish I didn’t photograph, which is upsetting because it was soooo good.  The fish was just perfectly cooked – I’m not sure I could replicate it with that crisp skin, but the spring onion vinaigrette (which is much thicker than a standard vinaigrette) is something I’ll definitely attempt.  And I’m not kidding about it – after raving (on and on) about it, Executive Chef and co-owner Kevin Tien came over to give me the recipe.  After tasting this sauce, I understand why Food & Wine just named him one of the 2018 Best New Chefs.  Much deserved. 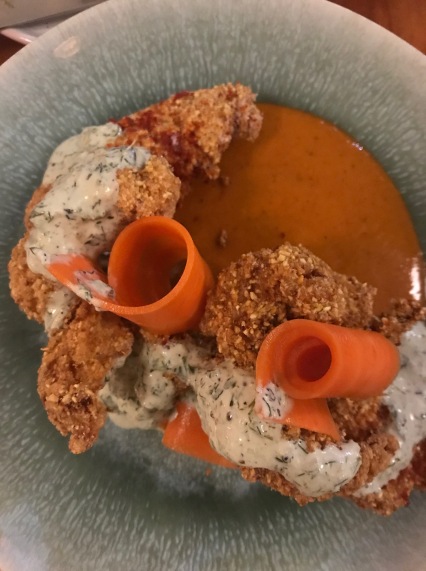 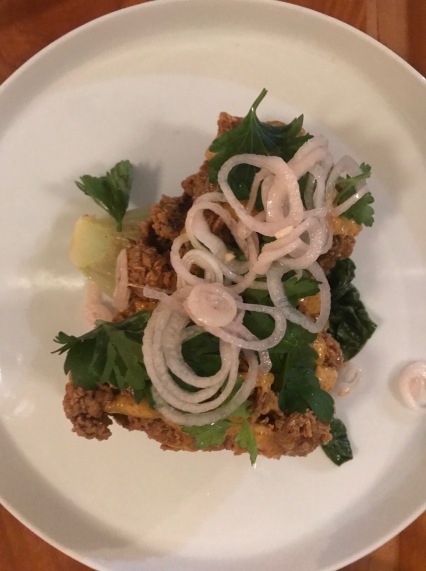 Top three dishes of the evening: hamachi crudo, charred broccolini with burrata, and ocean trout.  I could eat those three items every single day.  Living in NYC, that’s not an option for me, but I highly recommend you incorporate these dishes into your regular diet if you’re in DC.