My brother initially wanted to spend our first Vegas meal at an inventive French restaurant, but when we realized we had some serious carnivores in our crew, we switched gears and went with a steakhouse. That said, it was José Andrés’ Bazaar Meat, so this steakhouse was still inventive.

The first thing you see when you walk into the restaurant is a giant meat case. Behind it, butchers are going to town. I love this (and the overwhelming smell of char that permeated the waiting area). The decor element I did not love: the mishmash of items that made no sense. There were alligator heads everywhere with beads hanging from their jaws (though it’s not a party party restaurant as the beads would imply nor is it a seafood/cajun spot as the gators would have you think). There were also ski lodge style chandeliers that were in contrast with both the gators and the more modern menu. If I hadn’t enjoyed the meal so much, the decor would have really bothered me. 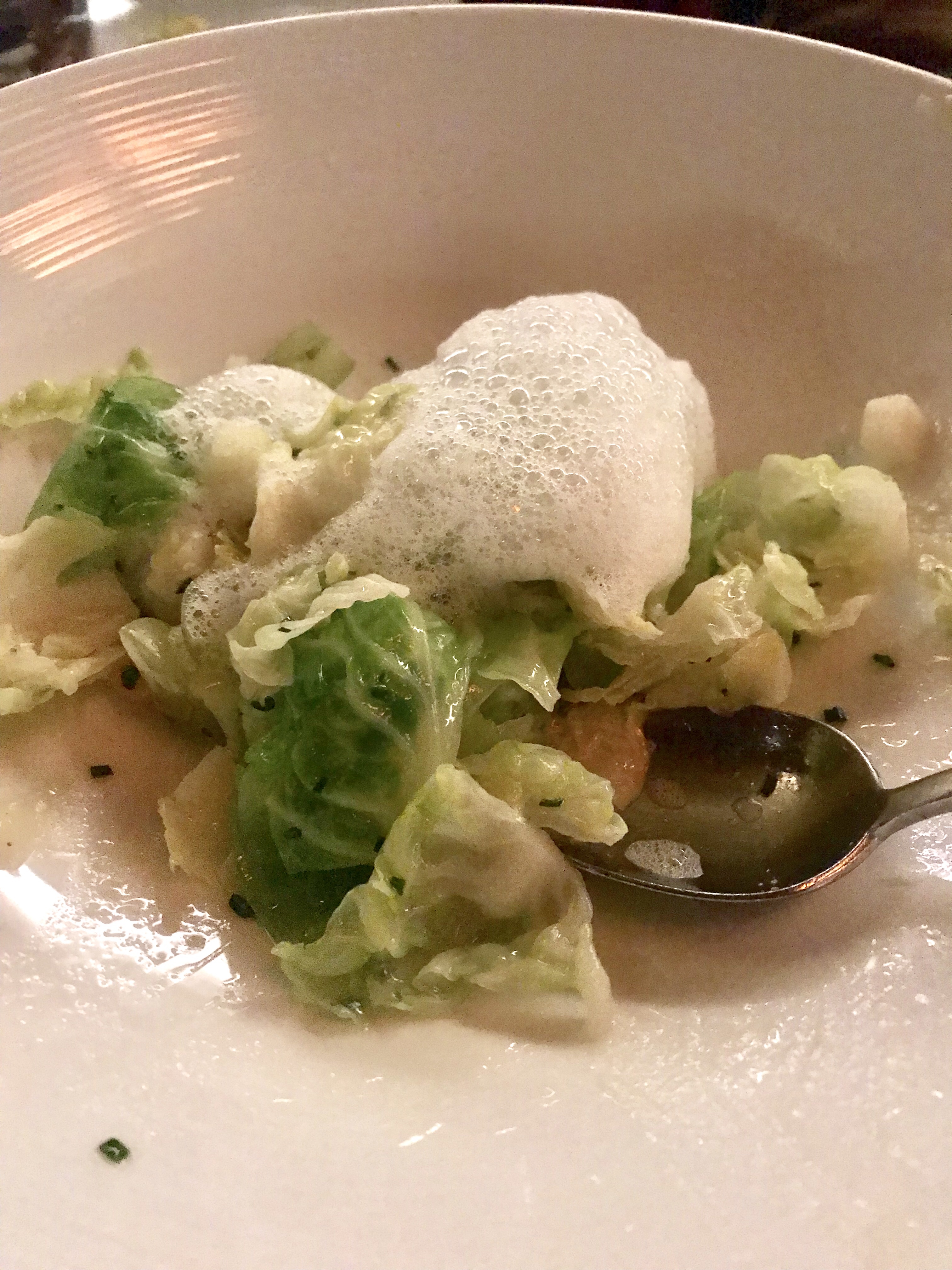 The food at Bazaar Meat is intended to be shared, which explains why the menu is divided into sections like “some little starters” and “some little sandwiches”. The best way to do things is to get several starters and a steak or two for the table and share around. Note: it takes an hour for the meat so prepare yourself for a wait…and if you’re not getting steak, why are you there? Also, to put this order into perspective, we were a group of 6 (one of whom is a light meat eater and ordered an extra salmon app for herself). I left satisfied but not overstuffed. 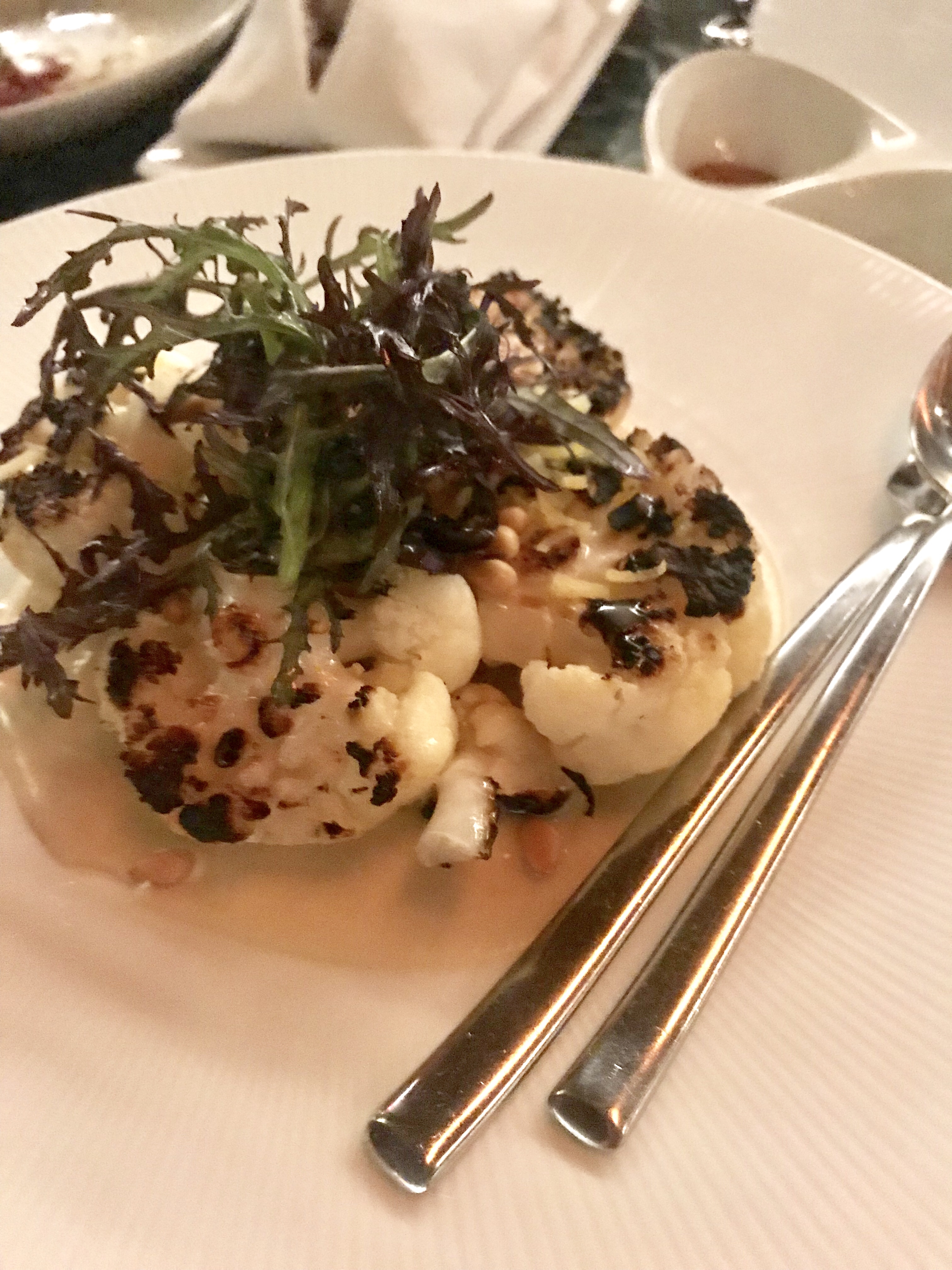 I feel like we had one more item than what I’m about to describe, but I can’t remember what it was…oh well. We shared around some veggies/sides that included shoestring fries, brussels sprout leaves (very light – good use of lemon foam), and cauliflower steak (also garnished with lemon – this time it was preserved, which offered a deeper flavor to match the hearty cauliflower). 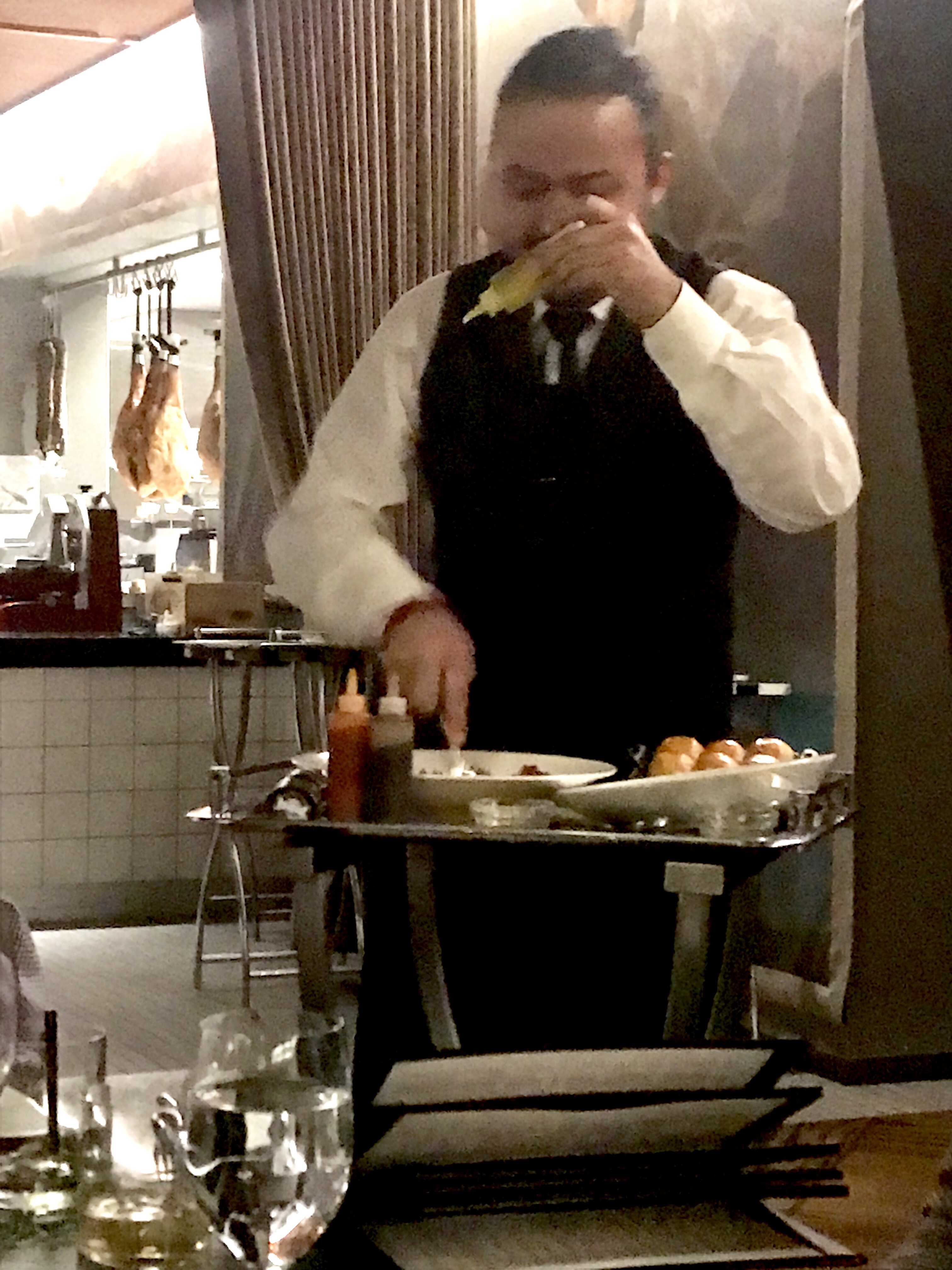 We also shared an order of classic beef tartare. The most classic part of this dish was the preparation – it was done tableside. I die for this. Beef sirloin was tossed with a bit of mustard, egg yolk, a little anchovy, and served with parker house rolls. 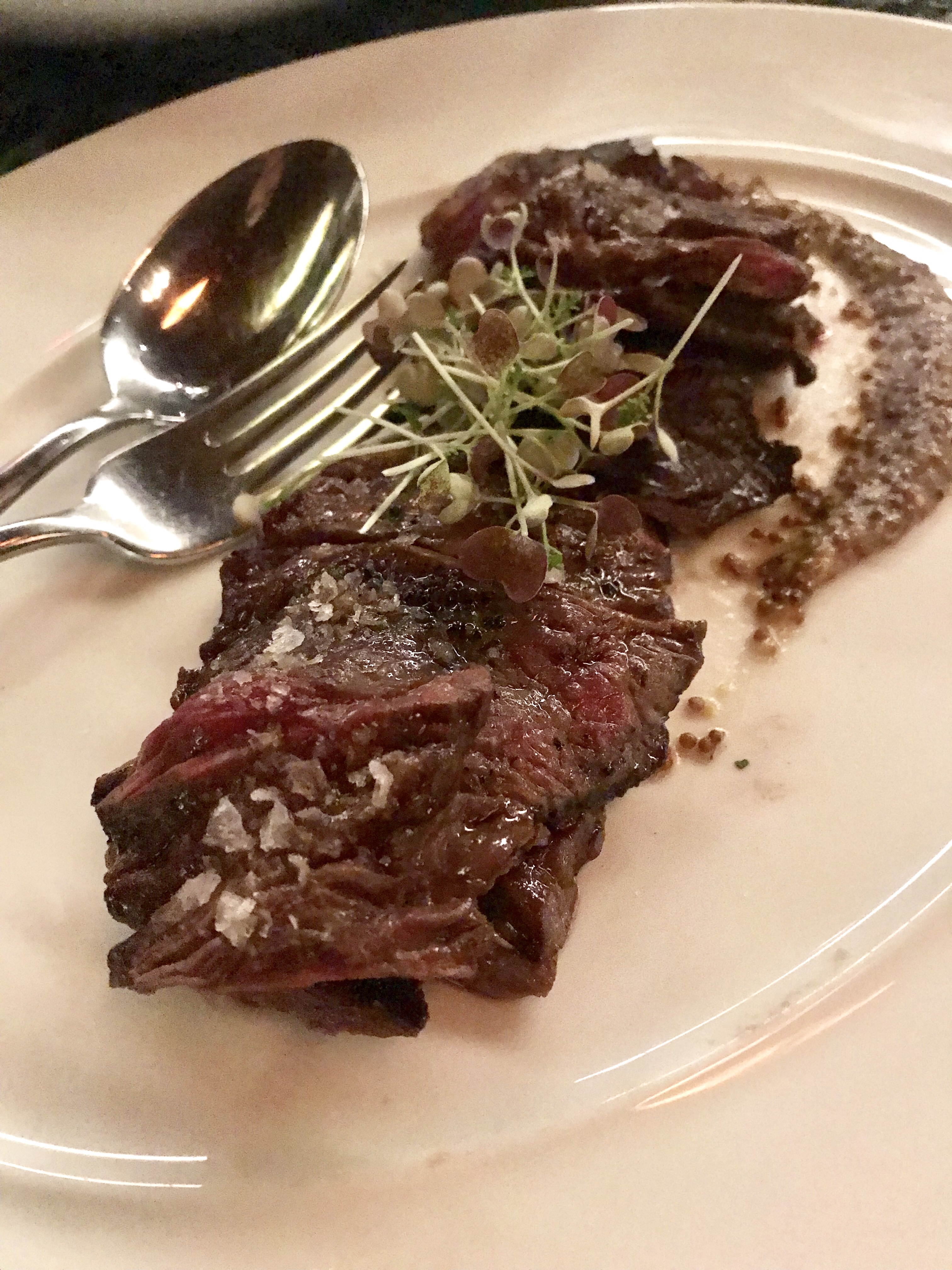 Now onto the cooked steak. We ordered three types: skirt steak (my bro’s fave – he loved the crust they got on it), a ribeye aged 8-10 years, and [me and my beau’s fave] a chateaubriand cut super thick yet still so tender with a rich gravy that really set it off. 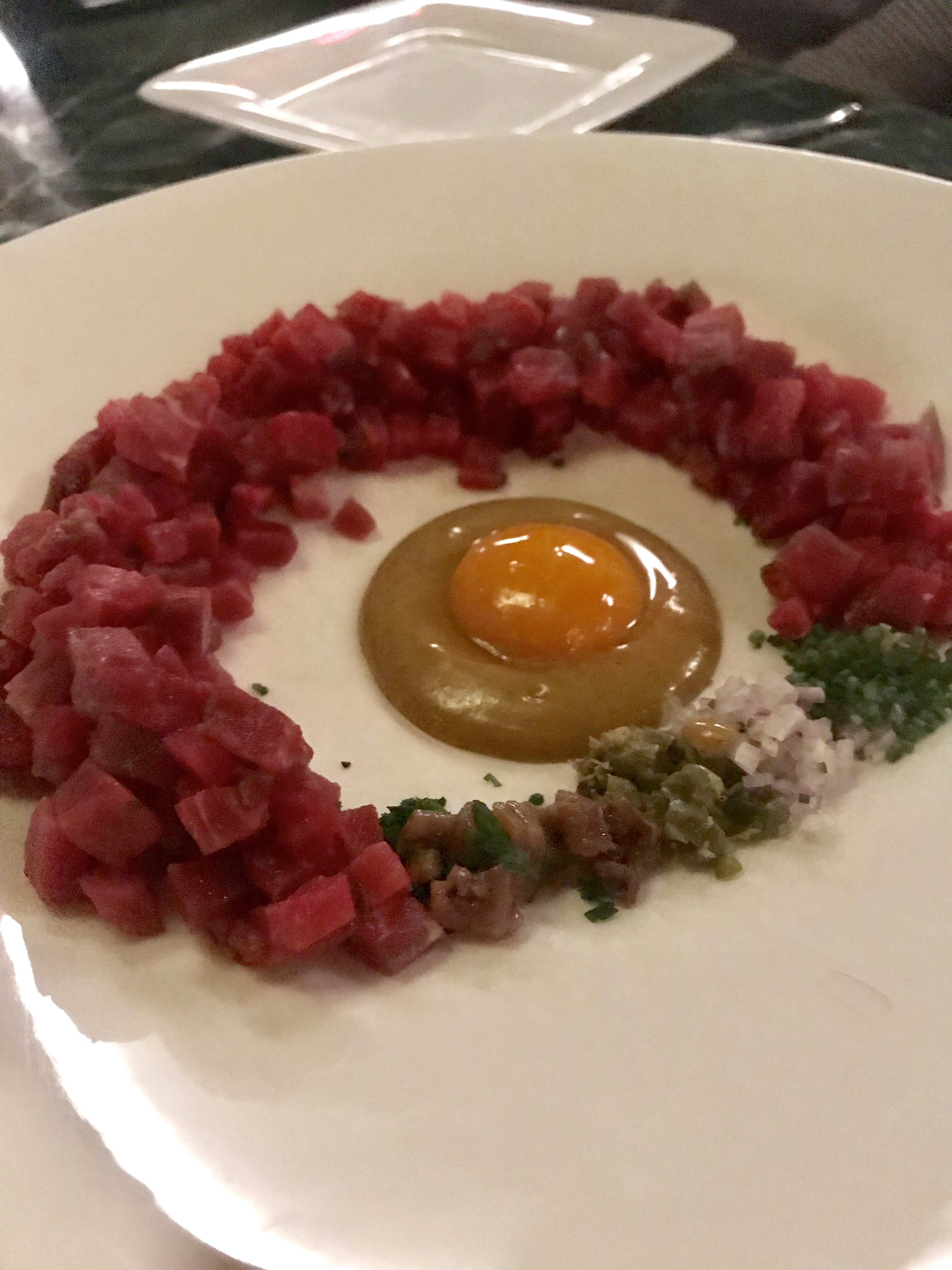 It was all good, but the best item of the night happened to be the first item to grace our table: the beef tartare. The meat was cut in thick chunks that looked like garnets. It was perfectly dressed with the egg and not overseasoned, allowed the richness of the meat itself to shine. My brother said he believed it to be the best tartare he’s ever had, and it’s definitely way up there for me.