I can’t believe I forgot to post this dish that I made back in September for Rosh Hashanah (which now feels like ages ago). I’ve eased my way into hosting the holiday, each year adding another item I always ate growing up. I had been dreading making stuffed cabbage because it seemed difficult and time consuming. But stuffed cabbage is one of the dishes that my beau and I have in common, despite coming from completely different religious backgrounds. I was eager to include it on our holiday table so we could both feel at home. Turns out, it’s actually really easy to make and I should have been doing it all along. And if you use a crockpot like this recipe instructs, you free up oven space.

I followed this recipe very closely but used all beef instead of a mix of beef and pork. I want to say this was for kosher reasons, but it was really because the store was out of ground pork. Honestly, any ground meat will do, but it’s better if it’s got some fat content.

Read the recipe yourself, but basically you’ll boil a head of cabbage for just a couple of minutes so you can easily peel off the leaves and have them pliable enough for rolling. Separately, you’ll make your filling: ground meat, uncooked rice, chopped onion, some liquid (tomato sauce or broth), and some garlic. You’ll roll the filling inside the leaves like a bunch of mini burritos and layer in a crock pot. Top all of them with a sauce made with tomato sauce, tomato soup, worchestershire, and paprika. Cook on low for 7 hours or high for 4 hours.

So I’ll start by soothing your fears: yes, the rice cooks. It seems weird to put uncooked rice into the filling mixture, but I assure you it cooks through. Also, they taste just like normal stuffed cabbage after cooking in the crock pot vs. the oven. And this method saves you oven space!

Now that you’re no longer worried about the cooking method, I must offer one major tip: make extra sauce and add it to the slow cooker sometime in the second half of the cooking process. Mine came out a bit dry, but that would have likely been helped with some extra sauce lovin. They’ll definitely make the cut next year!

Of all the photos they took at this #scds alumni cocktail party, they decide to put the one with my least flattering angle in the magazine that goes to every past and present student. Thanks. #tbt
Hot diggity dawg 🌭 #superduperweenie #retro #roadsideamerica
Driving Miss Tessy 🚙
💔 #thankyou
Park days been lookin a bit different lately 😷 #mcm #coronavirus #covid19 #conservatorygarden #reservoir
April showers brought some May flowers 🌷 #centralpark #conservatorygarden #i❤️ny 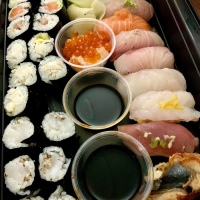