I took my weekend getaway to Philly as an opportunity to catch up with an old friend.  Brooke and I haven’t really seen each other in a few years, but after living in a sorority house together you kinda bond with a chick.  We decided to meet for dinner which of course really just means gossiping about our sorority sisters while people served us food.  I haven’t had a real trash talking sesh in a while due to the fact that I’m trying to behave like a mature adult…but it was nice to feel like a gossipy college girl again.

The Corner was the perfect restaurant for us to re-connect.  The food was great and by sitting at the chef’s bar, we had a first look at the food so we knew just what to order.  Plus, it kind of felt like we were sitting around the kitchen table, which is where all good gossip sessions take place and reminded us of when we used to sneak into the sorority house kitchen after hours to steal food.

I started with the mushroom soup and was happy to see that not only was the bowl large, it came with ricotta toast points.  The toast wasn’t just topped with a light layer of ricotta, it was given the NYC bagel shmear treatment.  Going heavy on the ricotta was fine because the soup had been strained to a thinner consistency.  I also ordered the kale caesar.  I know it appears on many menus nowadays so it’s not exactly special, but I thought it was prepared well.  It was too much food for me and yet the whole meal came to $14.  This is the kind of restaurant you would find in SoHo or the West Village…except all the food would be double the price.  Even the cocktails were $2-$4 less than they would have been in the city.  Those prices reeeeally make me like Philly. 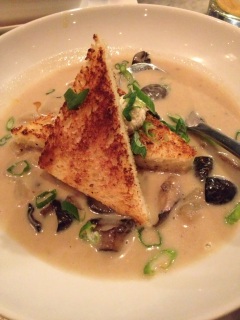