After dinner with Brooke, Albert and I decided to stay out for just two more drinks.  When you’re only in the city for 34 hours, the goal should be to pack as much in as possible.  We had passed Tria while walking around during the day and decided it was worthy of our nightcap.

We may have just eaten but, as I said, the goal was to pack in as much as possible and I needed to do my part…especially when I saw the cheese list.  I took charge of assembling the meat and cheese platter while Albert focused on the craft beers.  The server then helped me pick a wine that would work well with our selection.

It’s rare that a wine and cheese bar has such a good beer selection but more should follow suit.  It means everyone gets what they want because beer swigging guys don’t feel like they’re compromising by going to a girly wine bar. 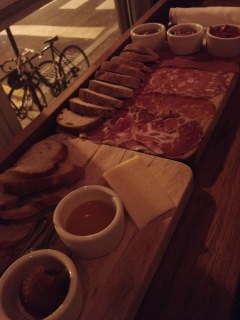