I tend to cook a lot of Southern inspired dishes at home – it’s what I grew up eating so it’s what I know how to cook best.  My Yankee fiancé has taken to my native cuisine quite well and actually really enjoys my Lowcountry food.  After four years of slowly introducing him to my hometown faves, I thought it was time to bring out the big guns: shrimp and grits.

I, personally, am not a huge fan of instant grits.  As they wisely say in My Cousin Vinny, “no self respecting Southerner uses instant grits.”  I feel like you have to put so much on them to make them taste good and the instant kind reminds me of the boring gruel you throw in front of your kids when you need them to quickly eat breakfast and get out the door for school.  I insist you go with real deal grits. Long-cooking grits don’t actually take that long.  30 minutes may be too much for a weekday breakfast, but for supper?  That’s nothing.  And when all other components of the meal come together so quickly, this is actually an easy thing to get on the table.

Start by bringing 1.5 cups of water, 1 tbsp butter, and some salt to a boil. Add 3/4  c. stone-ground grits and stir that sucker so it doesn’t get clumpy.  NObody likes clumpy grits.  They make me gag.  Bring to a boil then reduce the heat to low.  Way way low. Cover and keep cooking over low heat and stirring, adding a little water or milk/half and half when they start to dry out.  If they’re sticking to the bottom of the pot, that’s what I mean by drying out. Between water and half and half, I added almost an extra cup of liquid.  Stir throughout this 25 minute process and add pepper and additional salt to taste.

While the grits are cooking start preparing the shrimp part of the shrimp and grits.  The secret here, it should come as no surprise, is BACON.  Fry up 2-3 slices of bacon.  When they’re done, pick them up with some tongs and put them on a paper towel to drain.  You barely need a full strip of bacon per person because what you’re really looking for is that yummy yummy bacon grease to cook your shrimp in.  Season 1/2 lb shrimp with paprika, cayenne, garlic powder, cumin, and flour – all in equal proportions.  I like to do this in a ziplock baggie to make sure they get evenly coated with the seasoning and flour and will blacken nicely.  Place the shrimp in the skillet and cook in the bacon grease for about 2 minutes per side.

When the shrimp are done, remove the pan from the heat and finish getting your grits ready.  Chop up the cooked bacon and put it in the pot with the grits to help season them.  Since you’re adding bacon, now would be a great time to add some other flavor boosters. I added chopped scallions and made my grits nice and cheesy with a heaping portion (1/2 cup? Maybe more?) of shredded gruyere.

Place a large pile of those creamy, cheesy, delicious grits on a plate, top with some skrimps, and garnish with chives and parsley.  You may even have a few minutes left over to throw together a quick salad, which is a good thing because this main course is certainly not healthy.  But does health really matter when I’m telling you I think I’ve fully mastered grits? I mean these are a reeeeeal good version. After all, I had to remind my beau why exactly he made the right choice in marrying a Southen girl. 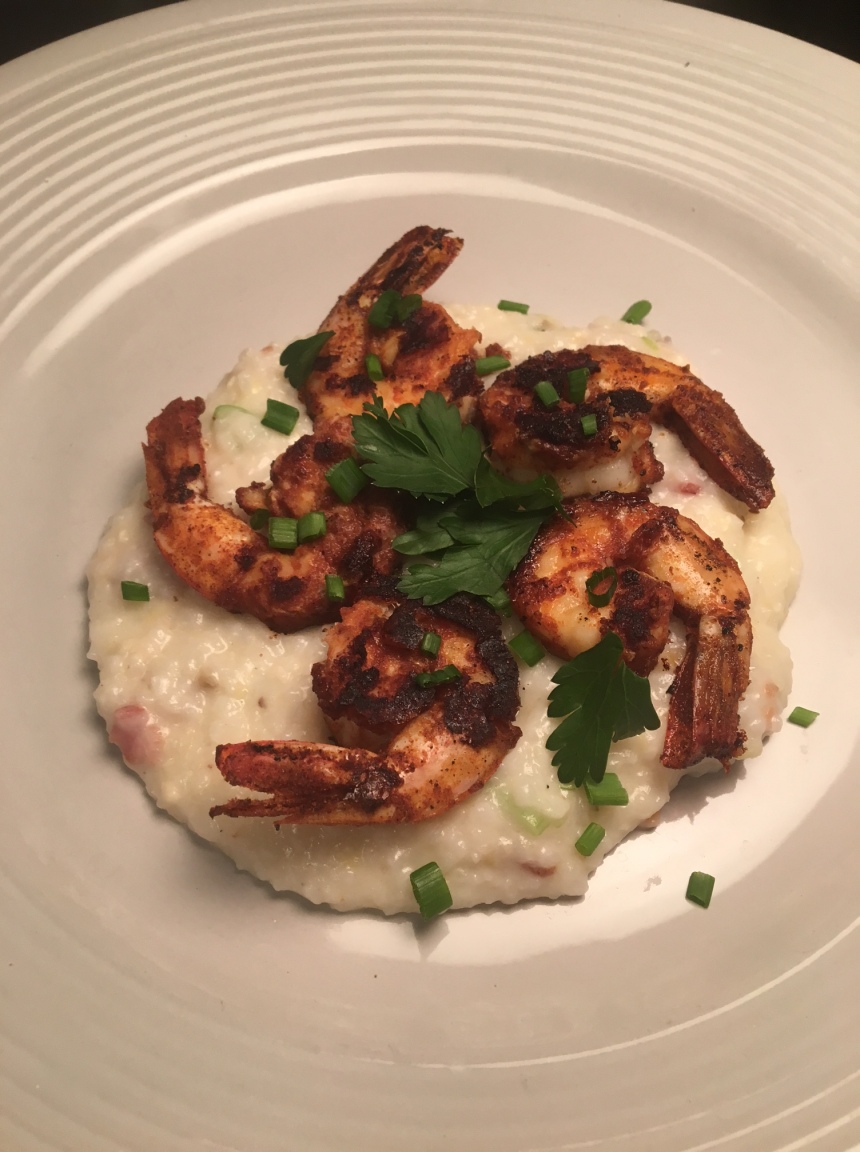 2 replies to Shrimp and Grits