I was super impressed by the food in San Diego. The tacos! Oh, the tacos! There’s so much great food in this SoCal city so this week’s Travel Tuesday will give you a rundown of our SD food journey.

When we arrived at our hotel, the room wasn’t ready but we didn’t care because we were just ready to hit the beach. We changed in the lobby bathroom and headed to La Jolla beach where our first stop was a cafe for some cold brew. (We had woken up super early; caffeine was very necessary.) Our uber let us off right in front of Cooper’s, which looked like as good a place as any for some java. This place is great because they have a little market so you can pick up some picnic items for the beach. 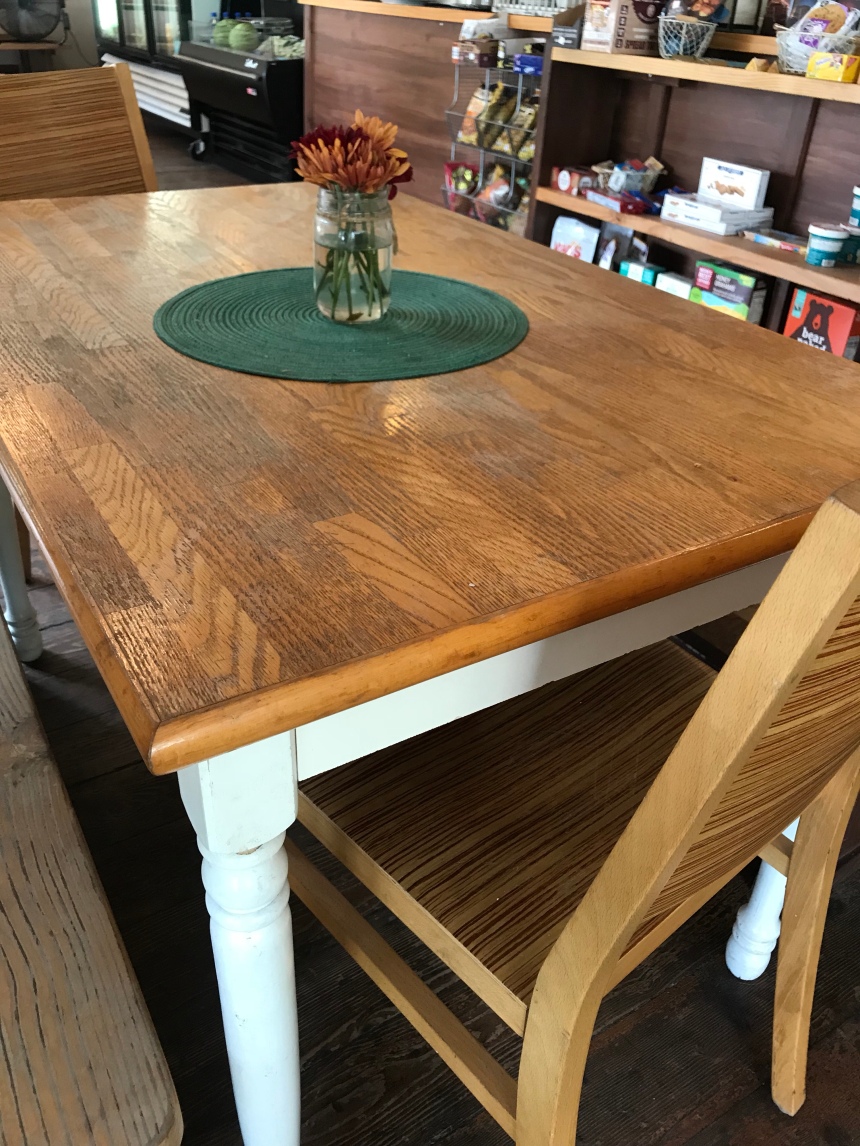 We got ourselves caffeinated while strolling along the beach. Around 12:30 we were feelin snack time so we made a stop for tacos at Shore Rider. I’m going to take a quick moment to warn you that this post will contain tacos. Lots and lots of tacos. I went to San Diego knowing one thing about the city: they’re known for tacos. I made it my mission to eat as many as possible.

The Avenue de la Playa is just one cute restaurant/bar after another. How did we pick Shore Rider? It’s exactly 250 steps from La Jolla Shores so it was pretty much the first spot we saw. The menu is all Cali classics, like tacos and poke. We just got a taco trio – like I said, it was just a snackie. We tried carnitas, carne asada, and Baja fish. The fish was definitely my fave of the three. Also, the sangria was a perfectly refreshing beach day drink. Note: looks like they have good bottomless brunch and Taco Tuesday specials, as if being beachside wasn’t special enough.

After our snack, we went back to the beach to meet up with some of the other wedding folks. We spent some time in the sun before heading to Galaxy Taco around the corner for a late lunch. The space is super fun with a graffiti wall and lots of dia de los muertos-esque decor. I felt like watching Coco on the airplane to California a few hours earlier had been the perfect pregame to this meal. 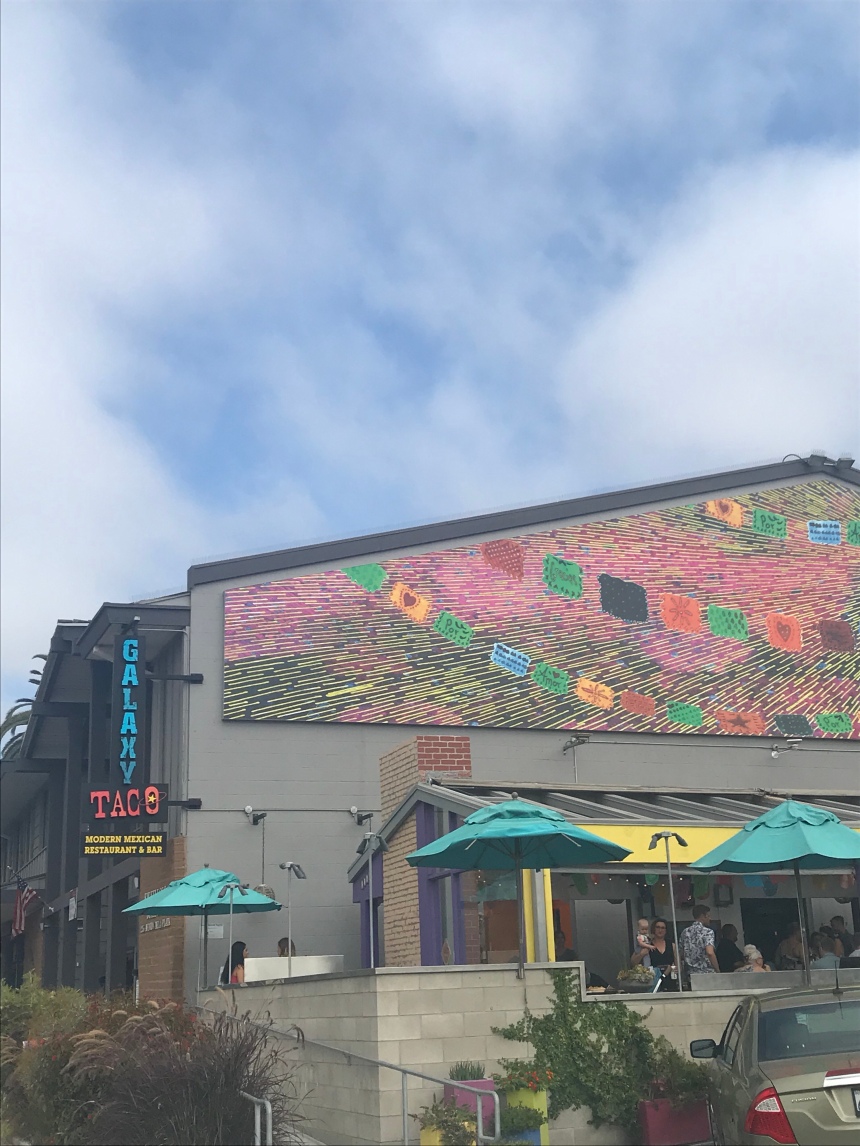 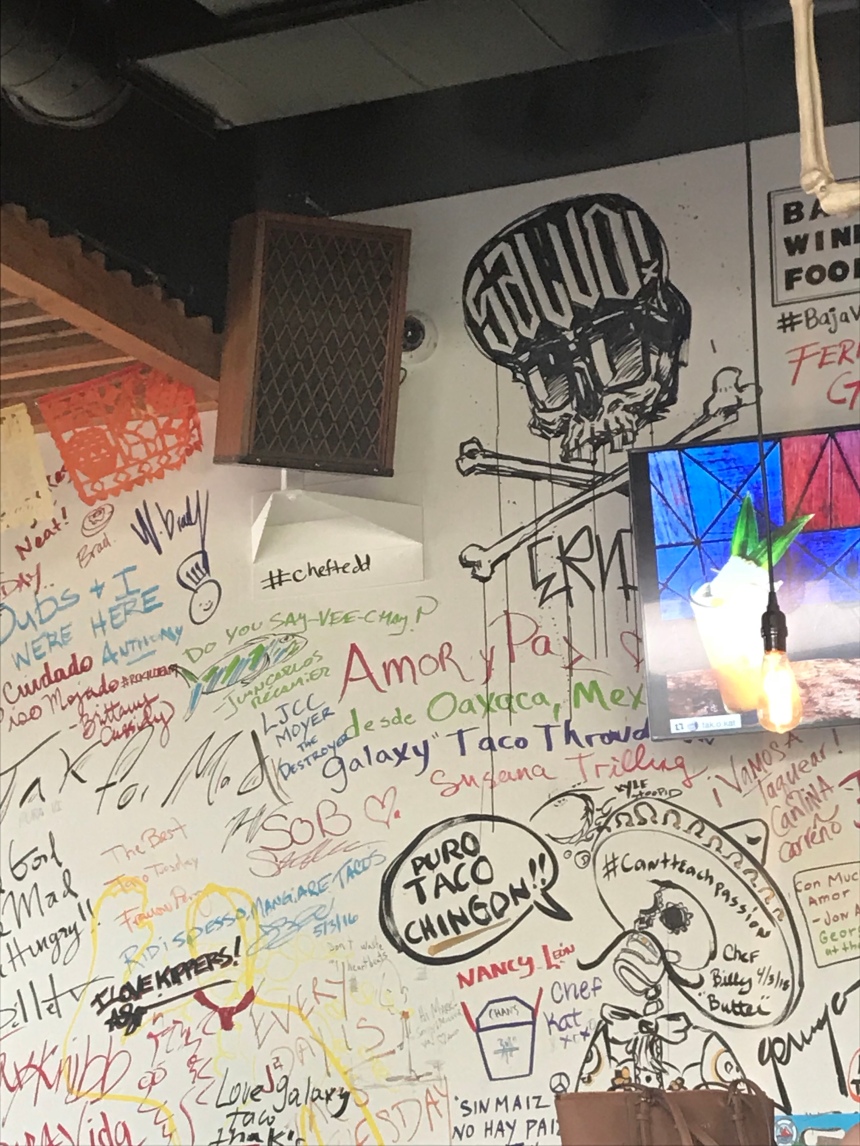 We were still a little full from our earlier snack but soldiered on in the name of taco research. Albert and I both got the chicken tinga taco, but then he went with [I think] a steak and a fish, while I tried the grilled avocado as well as a side of Brussels sprouts. 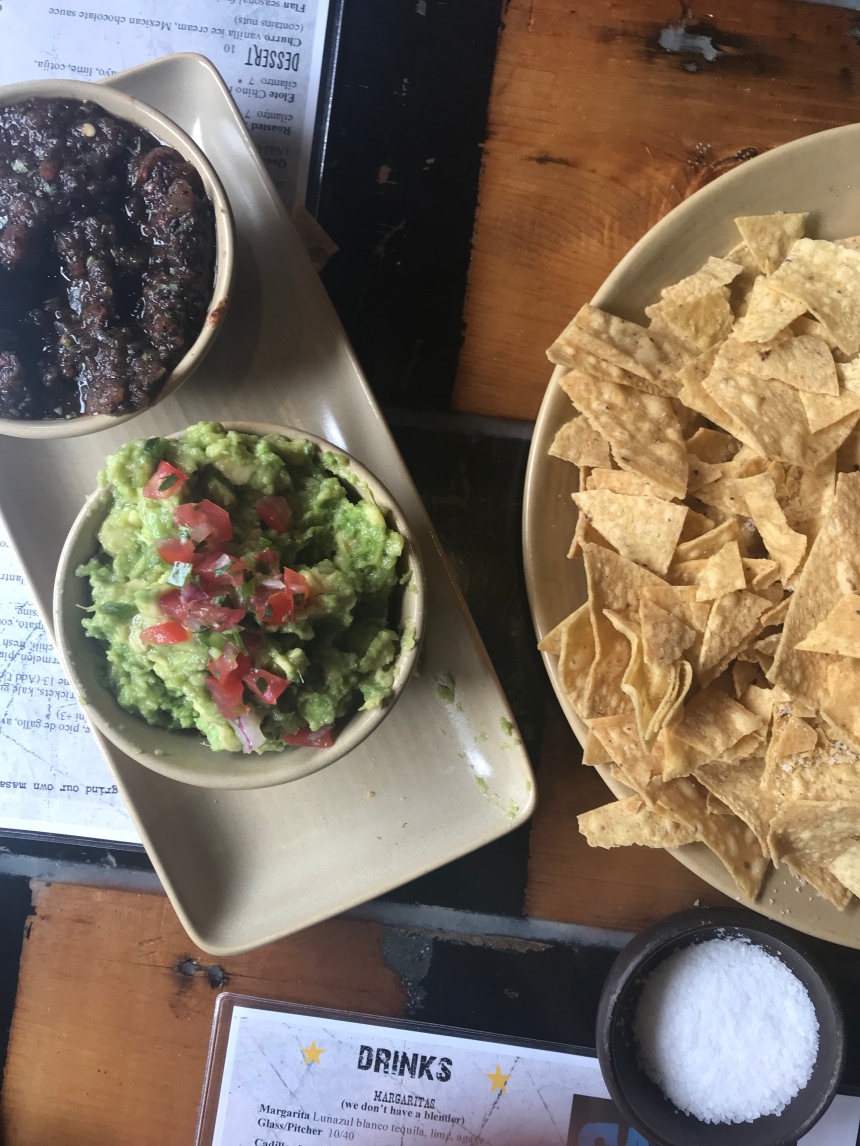 My beau preferred the tacos at Shore Rider, but I like the ones at Galaxy better because I thought they fillings had more flavor. I also looooved the Brussels sprouts, which were roasted and tossed with a chipotle aioli, cilantro, lime, and cotija cheese. I actually enjoyed them so much that I took a pic of the menu so I could remember the ingredients and recreated them at home. (Check the blog tomorrow to see how they came out.) 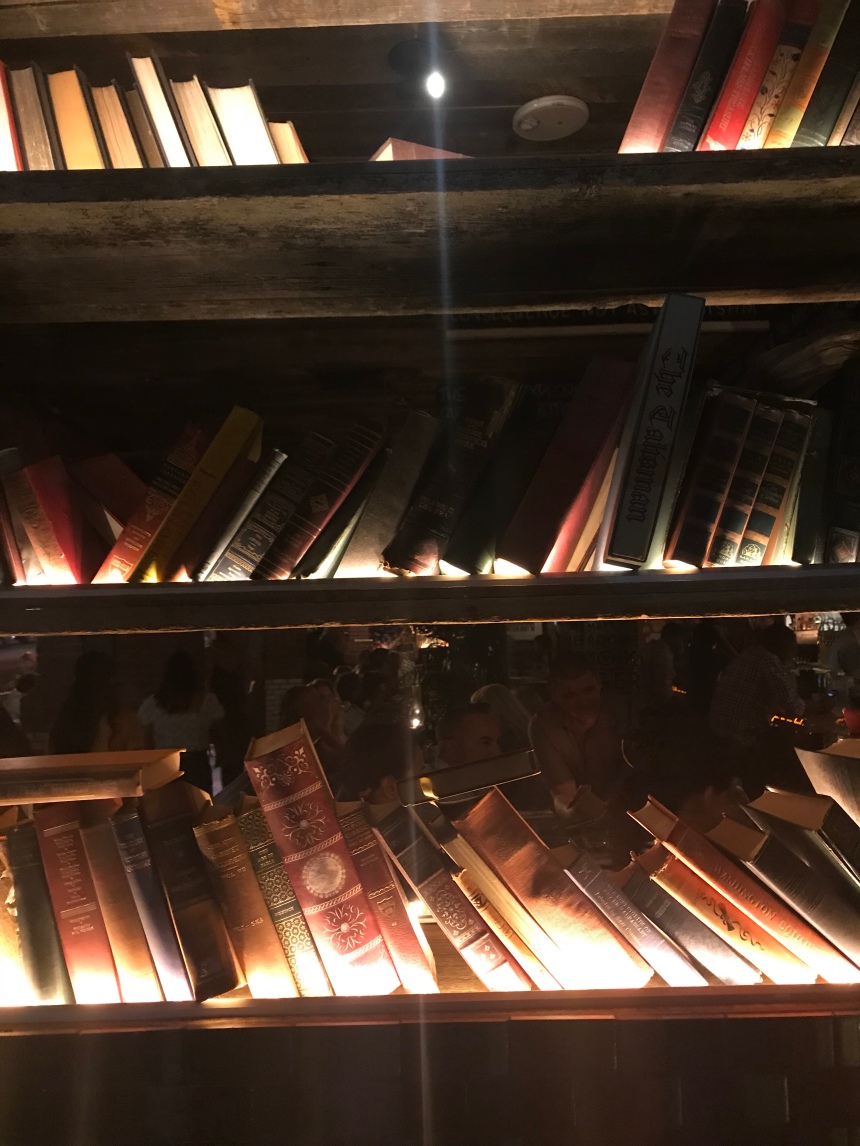 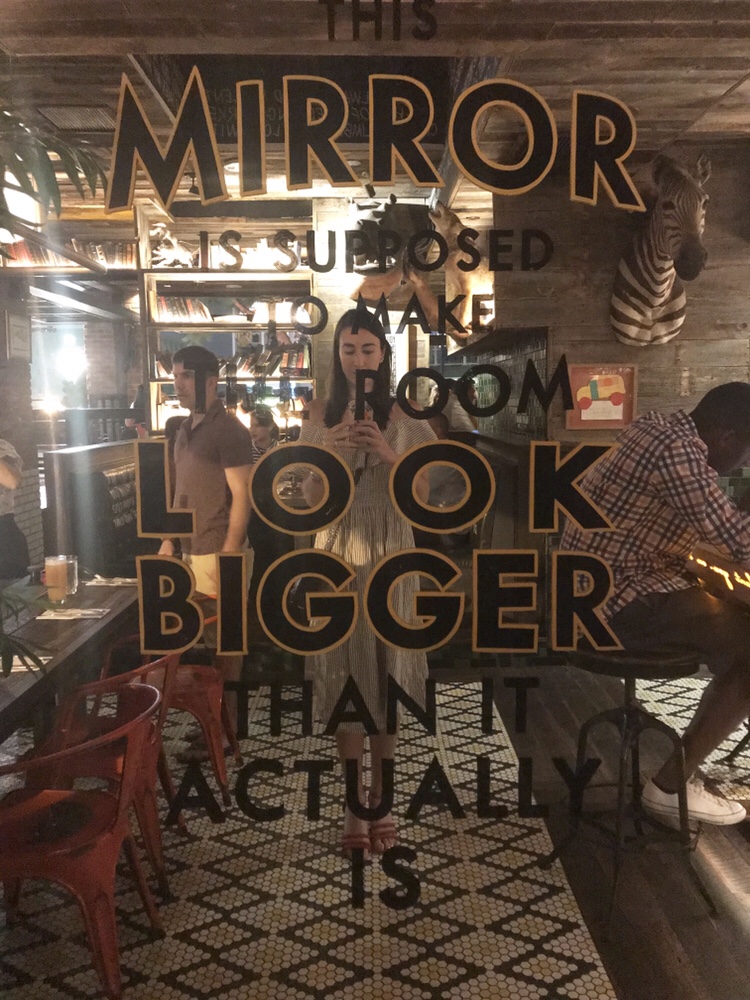 We had been going non-stop since about 5 am so we went back to the hotel to rest before supper, which Hart had booked for us ahead of time. At 8:30, we met Hart and Karin at Craft & Commerce in the south Little Italy area. I loved the layout of the restaurant. With multi-level, open windows, taxidermy, books, and mirrors galore. It was just a great vibe. The cocktails were also great. I started with the conejo, which had mezcal, habanero, and pineapple…as well as some funkier ingredients like carrot and green curry. Just like the decor (which, with all its many conflicting patterns, feels like it could be too much), it worked. It was smoky and spicy but not too much of anything. I later moved to an off menu cocktail the waiter crafted up with some cucumber and other goodness. The drinks were so good that I wish we’d had time to stop by False Idol, their hidden tiki bar. Alas, we already had plans.

Note: if you’re a vodka drinker, sorry, you won’t find a drop in this restaurant. You also won’t find any ketchup. The super sweet wait staff are sure to tell you these rules at the beginning of your meal, but don’t worry – you won’t miss those ingredients.

We tore through a huge chunk of the menu, sharing most of it. It was so good that Albert regretted agreeing to sharing because he wanted more of the smoked pork for himself. I, personally, was particularly crazy about the charred broccoli (THAT is a veggie) and the grilled oysters with curry and garlic. I’ve eaten a lot of oysters in my day and have never had them like this. All the other dishes (boar sausage and gnocchi, vegetable fettuccine, ribeye, and blueberry muffin bread pudding) were great as well. I didn’t get pics of everything, but that doesn’t mean it wasn’t all good. 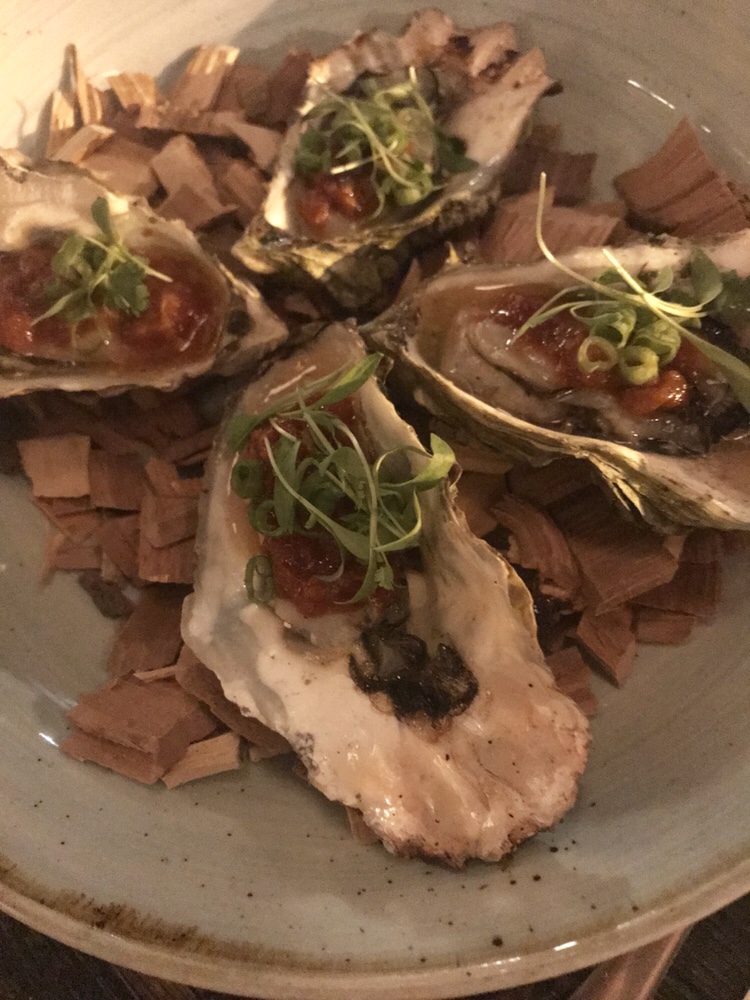 After dinner we met up with the rest of the crew at Coin Op. It’s a bar and arcade. I’ve been to places like this in NYC and DC, and this was just as good if not better. It wasn’t an official wedding event, but going to a place like this for a celebration after party is a great idea. 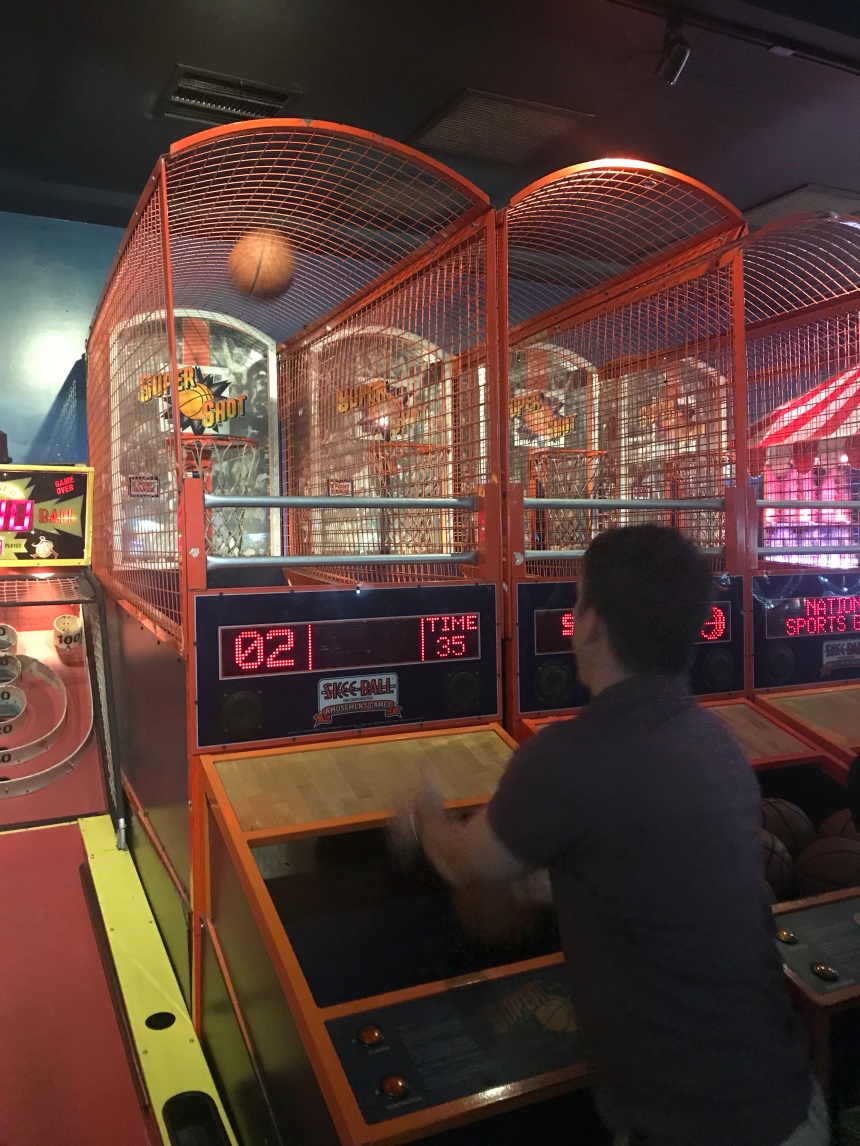 The main Saturday wedding activity was a rehearsal park day, hosted by the bride and groom. It was a drop in/out situation so we got there an hour in so we could make a taco stop. Was there going to be a taco truck at the park party? Yes. Did knowing that make us reconsider our taco mission?No. We went to Sandbar because we read they had some of the best fish tacos in Cali, along with a great rooftop view of the waves. Sadly, the roof was closed, but the tacos did not disappoint. I’m sure the other food is good, but go straight for the tacos, TKO style. Basically, you pick your protein and have it served up on of three ways. The TKO has a cotija-crusted flour tortilla, beer bribed slaw, lime crema, guac, tobacco onions, and fried cilantro. It was sooo good. Those melted cheese tortillas really took them next level.

Post-park, we hit up one more taco spot. Since our arrival, we had been hearing about the California Burrito, which includes French fries in its filling. I couldn’t not try a local specialty! Our friends suggested JV’s, but we were so close to Lucia Libre, which was tied with JV’s for most recommendations, so we walked there. LOVED it. The restaurant is fun, pink, and kitschy with luchador masks everywhere. They also have a legit salsa bar and Mexican cokes. 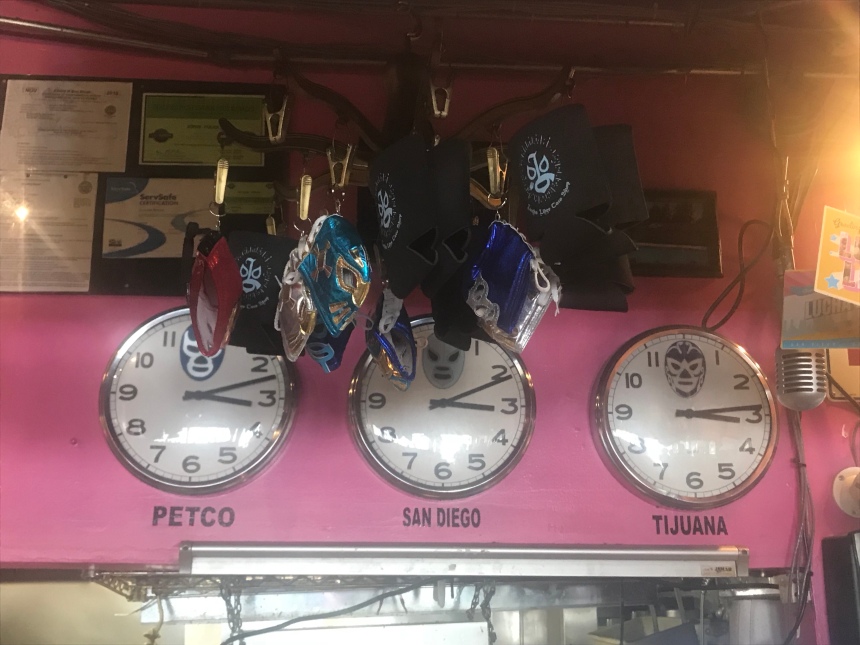 We got the surf and turf burrito, filled with carne asada, pico de gallo, sour cream, jack cheese, and, of course, fries. Yaaassssss. We need to bring the California burrito outside California. 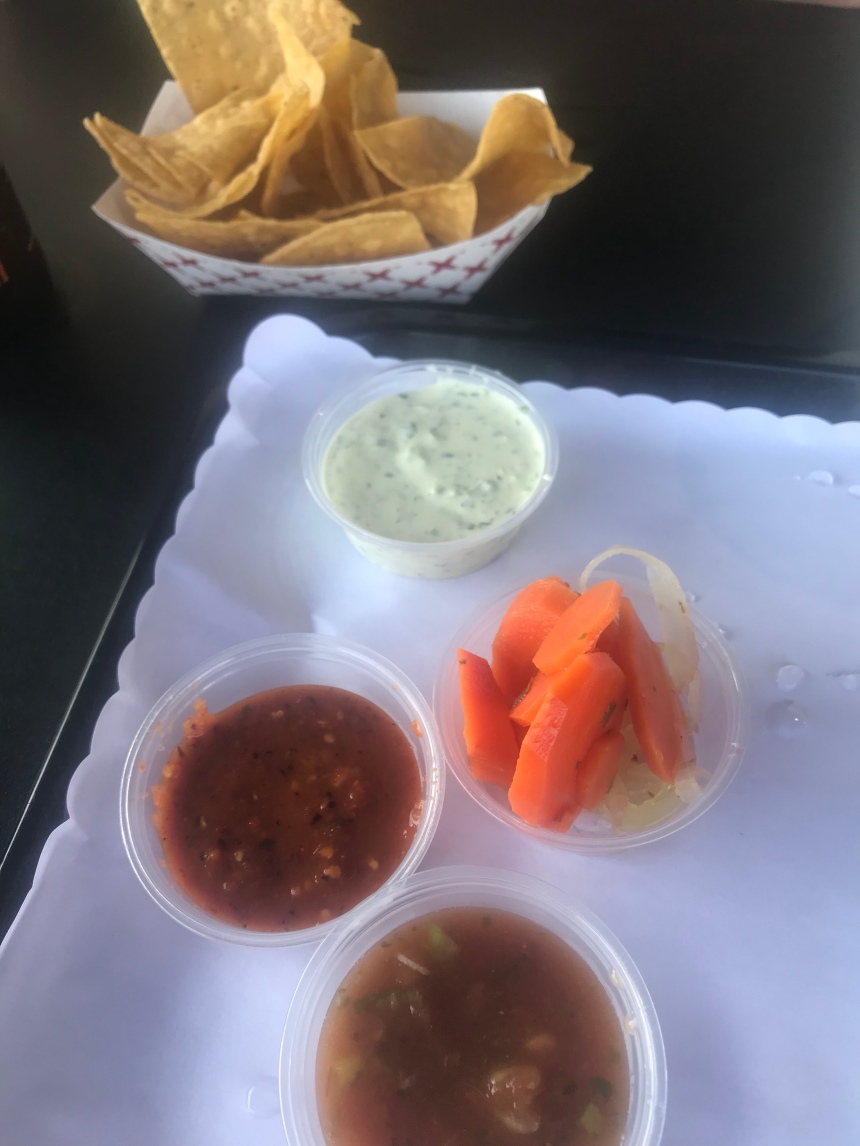 At this point, I realized we had made 5 taco stops in 27 hours. Perhaps that’s a record. Disgusting or laudable…you decide. We made a gelato stop across the street on international restaurant row before taking an Uber back to the hotel. 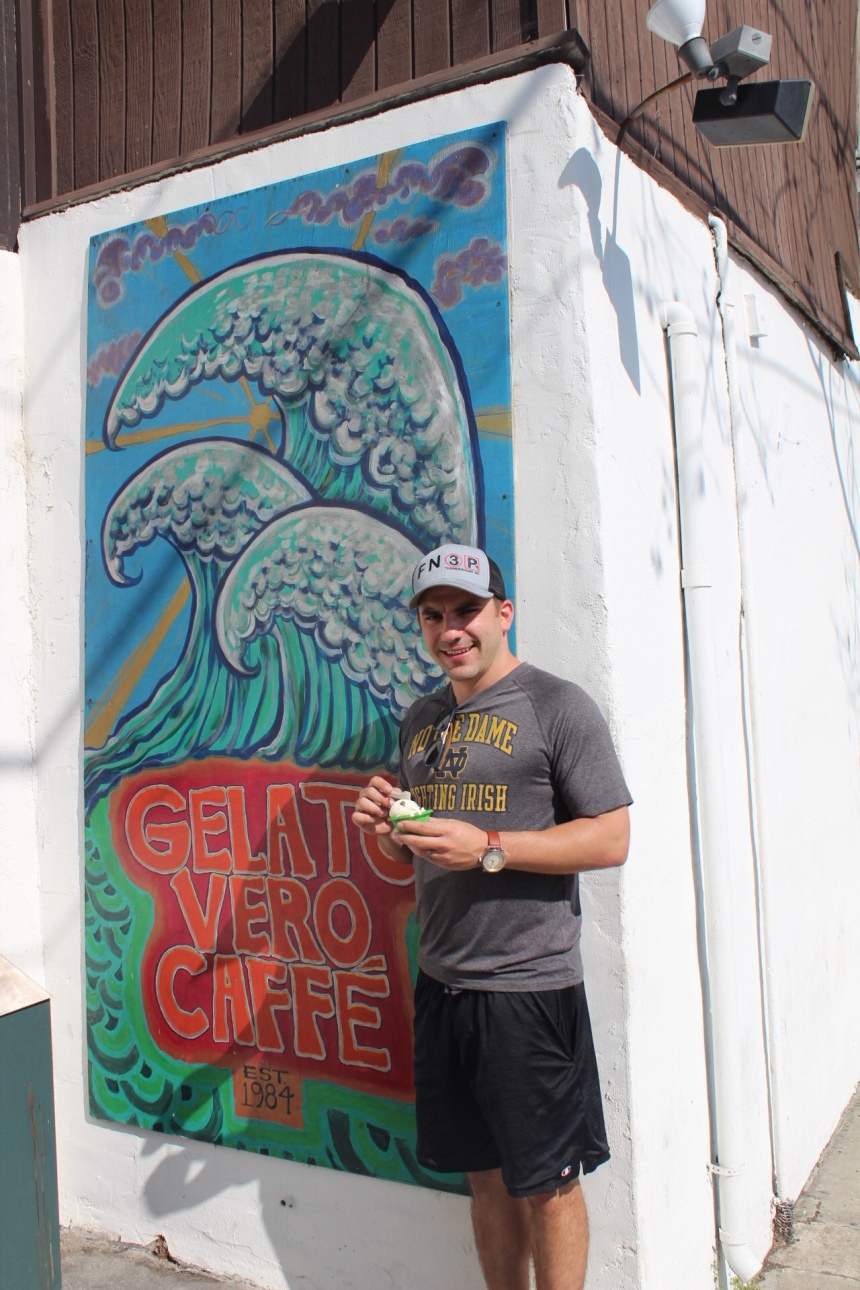 After letting our food digest (poolside, naturally), we gathered a great group of 10 at Herb & Wood for dinner. Once again, Hart found the dinner spot, and it was a really cool designed space.

We shared a bunch of apps and desserts and each got our own entree. I don’t remember every single item, but I do remember the standouts: the grilled avocado with nuoc cham (?), sesame seed crunch,burrata, and trout roe was absolutely fabulous and will need to be attempted by yours truly soon. I also loved the chicken liver toast. The pizza and cauliflower hummus were enjoyed by the whole table, and the peanut butter mousse dessert was the group fave (and we tried every single dessert). The only thing I thought was just ok was my fettuccine with clams and corn. The white wine and preserved lemon sauce was just a biiiiit too tangy. But overall, it was a fab meal.

After dinner, four of us stopped by Ballast Point for a nightcap. I got a tasting of four beers for $8 and was happy to see they gave some pretty hearty pours for such a low price. 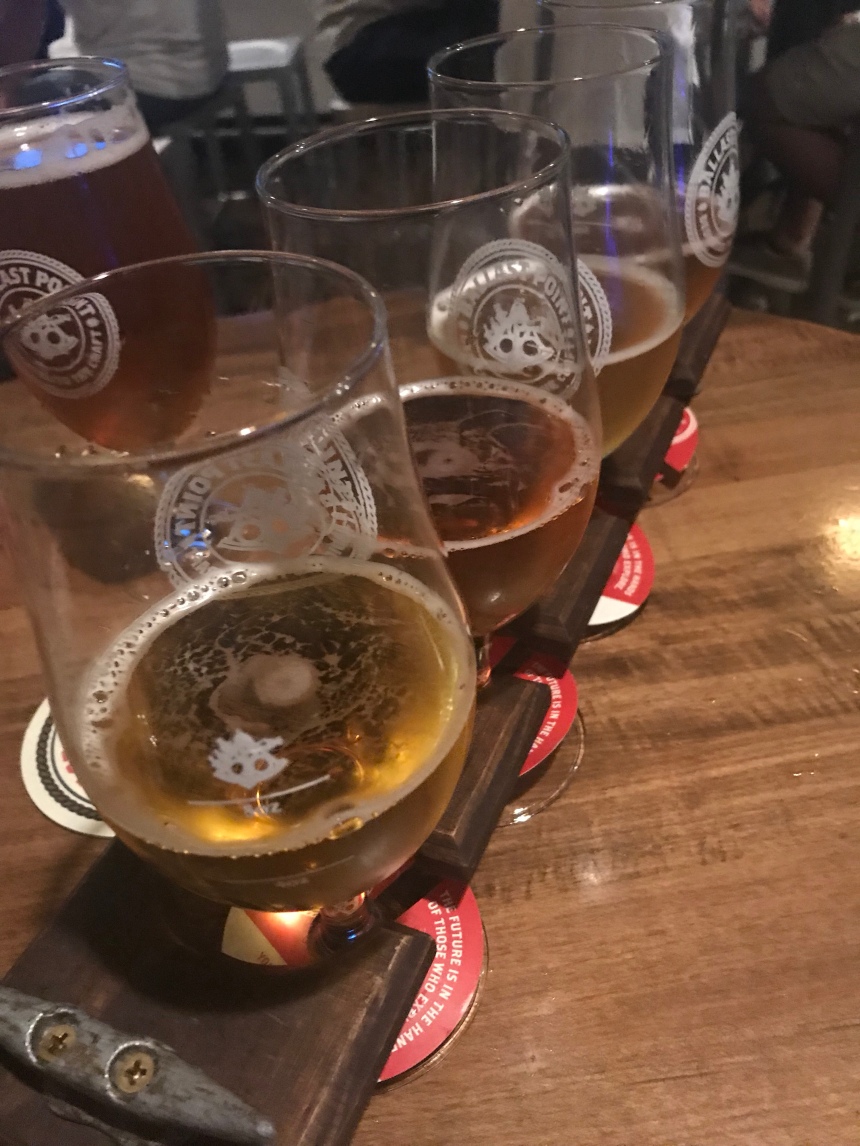 With the wedding starting at 4:15, we had a full half day on our own. Surprise! We didn’t go out for tacos! Our first stop of the day was In ‘n Out. My beau had never tried the famed West Coast burger chain, so it was a must. 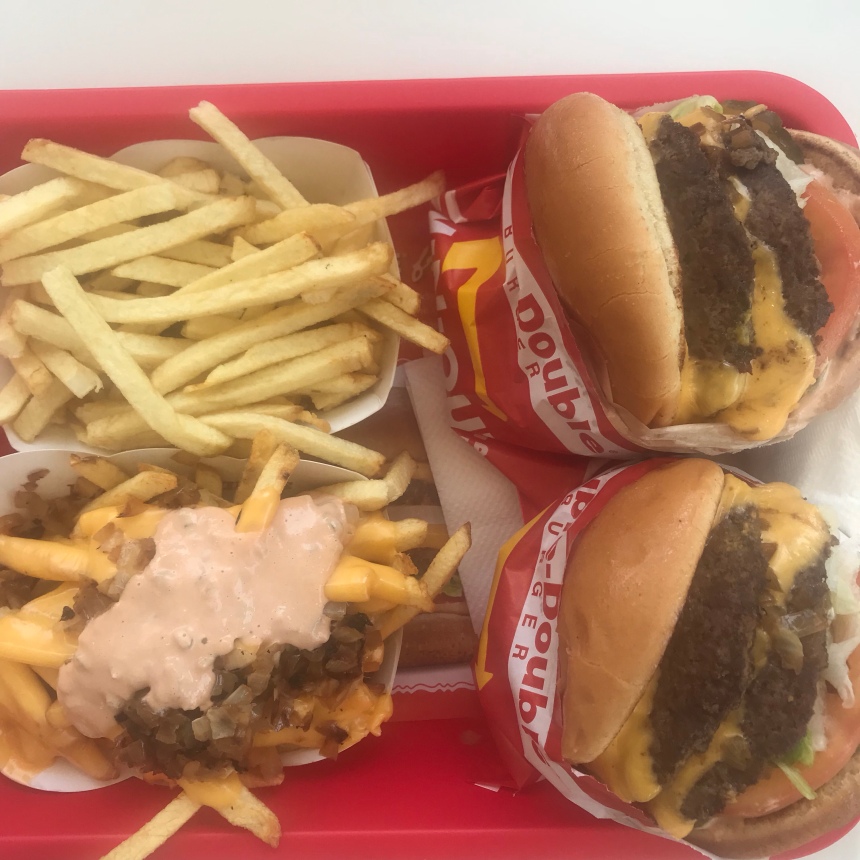 I desperately needed coffee so my first stop at Pacific Beach was Kono’s Coffee. This shack is better than most for two reasons: 1) it’s directly on the beach (even bad coffee tastes good on the water) and 2) they introduced me to using chocolate milk in coffee drinks. Why have regular steamed milk I. Your latte or redeye when you could have steamed chocolate milk. A revelation.

Our final meal was at the wedding where, yup, we ate tacos. The groom is a recent vegan and since the wedding was on the smaller side, they could accommodate his diet in a way that made everyone happy. When you’re cooking for fewer people, you have the freedom (and budget) to use some high quality, unique ingredients that make you forget there’s no meat. Harvest Kitchen catering made things like cauliflower tacos and romanesco broccoli rabe that even the carnivores liked (yes, it was a fully vegan menu). That said, we may have all gotten In-n-Out for the afterparty to satisfy our late night meat cravings.