Last weekend was an insane heat wave, but it’s been washed away by the rain this week. I’ve been a bit stressed about work this week so I’ve been trying to take it easy. A crazy busy personal life would only add to that stress. This weekend, I’m looking forward to catching up with a friend and going to see a Broadway show. We’re also planning to spend an afternoon in Connecticut so we’ll get to squeeze in some Neudeck fam time, too.

Truth be told, when Matt and Karina invited us over on Saturday, we didn’t realize we were being invited to a party. We thought it would just be the five of us, chillin in the backyard. Turns out, they had planned a bit of a shindig, but it was the best kind: a low key late afternoon event. The guest list was small enough that it still felt low key, the food was simple and just thrown on the grill (requiring little cleanup), and a 3:30 start time meant nobody got home super late after hours of hanging out.

Having fun with one of our many office pups.

I love when I’m able to throw together a real meal after workout that doesn’t have us eating super late. My beau picked up merguez from the butcher this weekend and grilled it up while I whipped up everything else. While merguez photographs terribly, I can confirm it tastes great when served over Israeli cous cous with steamed broccoli and feta and topped with a Greek yogurt/cucumber/dill sauce. The merguez reminded me of my time in France (le sigh) and after spending time this week planning our upcoming trip to Greece, I couldn’t help but put some Mediterranean flavors in there. 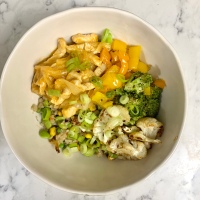 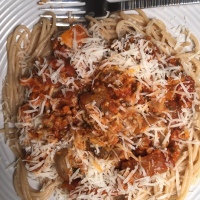 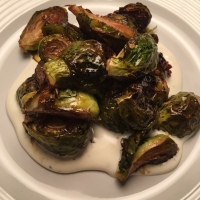 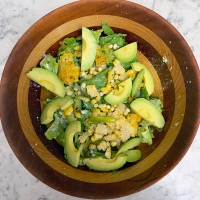